This is one of those projects where I can only take a tiny-bit-o-credit for anything but putting two other peoples’ ideas together, and then asking the amazing Mary to make it happen. &nbsp;If anything, I actually hurt the project a bit when I tried to help and discovered the best way to&nbsp;attach&nbsp;the 3-D flowers to the ceiling if our main goal was to have them randomly drop and startle both staff and patrons alike. &nbsp;But the end results are absolutely lovely and just brighten my day every time that I come into work.

Here’s where I got my core inspirations: &nbsp;<a href=”http://krokotak.com/2010/03/visyashti-tsvetya/” target=”_blank” rel=”noopener noreferrer”>Our 3-D Flower Inspiration</a>.&nbsp; Yes, this first one’s in Bulgarian – if your browser can translate, then great! Otherwise it’s pretty clear what to do based on the visuals alone. <em>(Gosh, I love the internet!)</em> Instead of sewing, Mary used quick-dry craft glue. &nbsp;<a href=”http://buggyandbuddy.com/giant-spring-flowers-made-with-collage-paper/” target=”_blank” rel=”noopener noreferrer”>This second inspiration for our 2-D flowers</a> made my mind go “gosh, that paper looks like it was color-washed with paint.” &nbsp;It was a shazam-moment, because up to that point I was planning on using tissue paper again. &nbsp;I excitedly called Mary when she was working at the Main Library and had her gather some larger picture books from our Book Sale that had been sitting there for months. &nbsp;I explained to her that we could color-wash the pages pretty colors and then make all of our flowers, both 3 and 2-D, out of them. &nbsp;She took those ideas and totally ran with them with magnificent results.

Basically, she used some liquid watercolor paints, a spray bottle of water, and a good paint brush. &nbsp;She removed the pages out of some large outdated junior non-fiction books and she would add color, spray water, spread the color over the paper and sometimes spray one more time to create interesting patterns. &nbsp;After the first side dried, then sometimes she’d repeat on the other side – usually using a different color. &nbsp;Many times she left the other side as-is, which was equally pretty.

Once the pages were painted, then she either used a paper cutter to cut out strips of various sizes for the 3-D petals, or would freestyle the large 2-D petals. &nbsp;Then lots of gluing.

<span style=”font-style:inherit;line-height:1.625″>Finally, minimal tape was used to hang-up the 2-D flowers. &nbsp;She added a fun and unexpected 3-D element to the flower stems with the leaves naturally drooping over. &nbsp;LOVE it.</span>

The silly way that I had tried to hang the 3-D flowers? I poked a hole in one of the flower petals and stuck one end of some fishing line through it and taped the heckie-pooh out of the end. &nbsp;Then the other end of the line was looped over a wooden beam and tied with a knot. &nbsp;The majority of the flowers fell off the end of the line. &nbsp;We had to go back whenever a flower fell and just loop the line around a petal (similar to the original inspiration blog) and tie a knot or two with the one end of line. &nbsp;For good measure we’d also tape down the end of the line onto the petal. &nbsp;We had the doors open the other day to let in the springtime breeze and the flowers looked so pretty twirling in the breeze – and NOT ONE fell down with the secondary tying method.

Mary also made a “May Flowers” sign in the front door (I couldn’t get a good pic of it due to all of the crazy reflections on the glass).

My favorite part of this whole thing? &nbsp;I was checking out books to a boy (around 7 years old), and he was looking at one of the giant window flowers. &nbsp;Suddenly he said in a somewhat awed tone “that’s like Eric Carle.” &nbsp;That was never our intention, but it was one of the best compliments we’ve received about any of our displays. <p style=”text-align:center”><img class=”aligncenter wp-image-564″ title=”Looook at the preeeety flowerrr…ignoooore the dirrrty winnndow pannnnes…” src=”http://hafuboti.wpcomstaging.com/wp-content/uploads/2013/05/1.jpg” alt=”” width=”584″ height=”1607″></p> 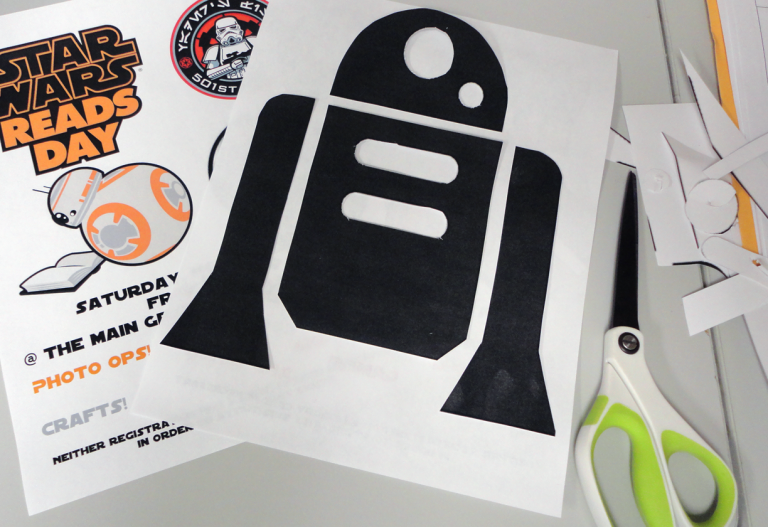 This is one of those ideas that I really can’t explain how I came up with it. It just sort of happened. About a month prior to having this idea, I had a realization: use all of the front entryway windows at our main library building for programming flyers. Prior to this idea, all events…

I have a lot of fun trying to decide what to do with our giant front windows that take up most of the face of our building. &nbsp;One idea that I’ve been exploring (once before with the <a href=”http://hafuboti.wpcomstaging.com/2013/05/19/i-spy-a-summer…g-picture-find/ ‎” target=”_blank” rel=”noopener noreferrer”>Epic Picture Find</a>) is having games or activities be the display. &nbsp;So far…

At the Children’s Library, directly across from the circulation desk hangs our events bulletin board. &nbsp;It was very dark and utilitarian, but it got the job done of sharing both community and library events. &nbsp;But I think that when most people think “children’s library” they don’t imagine utilitarian and gray things. <p style=”text-align:center”><img class=”aligncenter wp-image-459″…

Rachael Smith, a super-nice Access Services Associate at Mount Holyoke College , wrote me a squee-worthy email. Within it, she provided me with a Norwegian translation (which reads The Library Is For Everyone). Sven Aas, the Head of Web Services & Application Development at MHC, and his native speaking Norwegian cousins, worked together to come…