I’ve been meaning to post an update to our wildly successful Little Library LEGO Checkout Club back in March/April (during our LEGO Mania Month), but have felt a little “library burn-outed” since our Summer Reading Program has been going nuts (in a good way). I must bow humbly before the awesome Bryce Kozla Blog for sharing this program – she’s amazing! If you don’t follow her blog, then you really should. Seriously.

To say that our LEGO Checkout Club was a success would be an understatement. Just last week a boy was upset that we didn’t have this program still going. We promised him that we’d bring it back in March/April of next year. We must if we hope to have a chance at beating this year’s participation numbers.

Want to see our tower on the final day? From a young child’s perspective?

For the final two weeks, many parents had to pick their children up in order to add bricks to the upper part of the tower. It was pretty adorable.

What’s that? You’re astonished at how very clean and “towerly” our tower is? Well, I have to make a confession: my team and I did that (but mainly me). By week 3 it hit a level of craziness with the tower where a surprising number of children were “accidentally” knocking down parts of the tower so that they’d get a chance to play some more vs. only putting on three bricks at a time. There were also a lot of genuine accidents where as a result both the children and parents would feel terrible.

To solve both problems, my team and I would run our hands over the tower during slower times and securely reattaching any ;bricks that broke off. As a result of our “secure engineering” the tower took on a less wild and crazy organic look. This also saved lots of sanity on both parents and our parts. To be clear: I’m not against wild and crazy organic looks, I’m against people feeling terrible when they don’t need to.

I also went through the LEGO bricks and made sure that all of the bricks were the same height which cut down on its wonkiness. <<<technical term

We had several children express sadness that the back of the tower wasn’t very impressive. One girl suggested that we get some sort of turntable so that the tower would be built “evenly.” We’ll actually consider how to make that happen next year since it seems like an excellent point. It could also be disastrous (see above paragraph about accidents).

UPDATE: We did get a turntable. Check it out here and here. Spoiler alert: we love it now that the batteries are removed.

We opted not to keep the tower up for a long time after it was complete since 1. kids would see it and want to build on it (and explaining over and over why they couldn’t would be sad on many levels), 2. we didn’t have a good spot where we could safely display it for all ages to see, and 3. I needed to count the bricks for reporting purposes.

BUT, I wanted to be sure that the kids knew the results as well as have a clear indicator that the program was over – so I made a sign and put it out where the tower had been:

One thing I realized very quickly after putting out the original sign was that “71 feet” meant nothing to most children. Therefore, I looked for and found something around 10 feet tall that kids had likely seen: elephants!

I had a vision for these caddies after realizing how boring (and unsuited for our needs) our industrial caddy was. I mean, we’re a Children’s Library – amiright?! I originally thought that we’d have one slightly larger customized LEGO caddy. However, after spending several days having to constantly reach across the desk to get to the centralized caddy for almost everything (either having to get out of or move the desk chair), I realized that we could have TWO: one for each computer station.

I gave this project to the eclectically talented Brittany, and she completely rocked it. She made each one during part of a shift. In the near future she’ll also be making several LEGO bookmark holders (replacing the current crummy holder) – I can hardly wait! I’ll be sure to share pictures of those as well.

The only downside so far is that we’ve had one or two toddlers reach across the desk and grab at the caddies. So far both staff and parents have caught it before anything could go wrong. I’ll be sure to update here if this continues to be a trend and/or if tragedy strikes.

Anywho – I wanted to be sure and share the fun LEGO-ing we’ve had going on this year at the library. Let me know if you have any questions about anything here (or on the rest of Hafuboti for that matter). Also, if you or your library have done anything creative with LEGO bricks, then I’d love to hear!

Soraya, an awesome librarian in Vegas, reached out to me with a Croatian translation provided by a library patron. She wasn’t sure whether or not I was still taking translations. YES I AM – in case you were wondering that too. UPDATE 4-13-2022: YES I STILL AM Thank you to both Soraya and her Croatian-speaking…

Ellen Nabeti, RPCV reached out to me with the I-Kiribati #LAFE translation. She used the Submit a Translation form on the #LAFE Library page to send me this beautiful Micronesian language to be turned into signs. Thank you for reaching out to help spread the #LAFE message, Ellen! 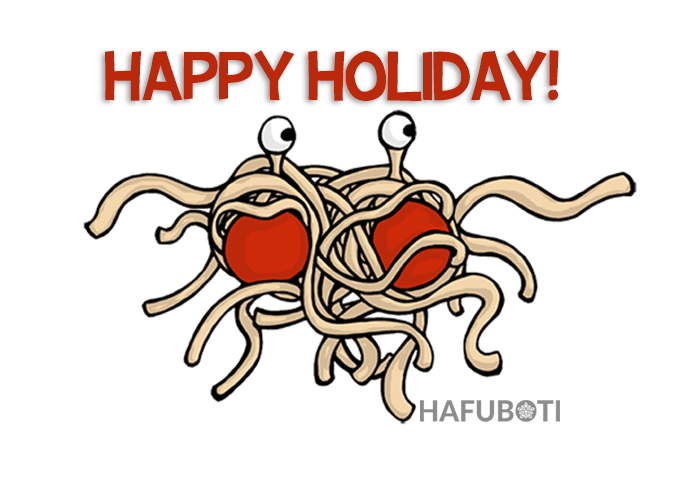 You may have heard of Pastafarianism a.k.a the Church of the Flying Spaghetti Monster (FSM), but did you know that they have a very special holiday in December? It’s called…wait for it…Holiday. Therefore, they are thrilled to hear people say “Happy Holidays” since they just assume that you’re inaccurately pluralizing the name. One of the…

<a href=”http://hafuboti.wpcomstaging.com/wp-content/uploads/2013/09/checkout.png”><img class=”alignnone size-large wp-image-765″ src=”http://hafuboti.wpcomstaging.com/wp-content/uploads/2013/09/checkout.png?w=584″ alt=”” width=”584″ height=”438″></a> I’ve been trying to be better about keeping track of important dates that might pertain to the library (I made a&nbsp;<em>Pinterest</em> board for it and that’s massively helped me). &nbsp;So I was very aware that September is <em>National Library Card Sign-up Month</em>. &nbsp;However, I hadn’t made…

This is a rather challenging post to write since the theme for October 2021 was in honor of a dear library patron who unexpectedly passed away. They were a huge proponent of early literacy, and were a core part of the family who runs our town’s incredibly popular pumpkin patch. Our team decided we wanted…