What can I say? It was a challenging, but overall good year. Looking back, I mentally shake my head and am just filled with wonderment. Partially because I survived. Partially because I had absolutely no idea how my resolution to steadfastly sparkle would bring about some amazing opportunities in my career.

And as I type this, it’s really hitting home that I think that I did an okay job at steadfastly sparkling in 2015. I think this may be the first time I’ve ever really felt the good karma boomerang in my life. It’s a great feeling.

Someday I’ll need to tell y’all the story of taking my mother-in-law’s ashes to her favorite mountain to … actually, I’ll tell it now because I know that you’ll want to know – skip this if you don’t like morbid humor and/or jovial Australians:

Bruce and I were sort of at a loss as to how to take his mother’s ashes – along with the ashes of three of her cats that we discovered while cleaning her place – to her favorite mountain in Arizona. We finally settled on taking them in the picnic basket in which she always used to keep her creative writing.

It was a bit of a hike on a hot day, and so what do you wear to what amounts to an outdoor funeral that requires a two mile hike to even get to the beginning of the trail? We figured it out, and made our way to this popular trail.

We were nearing the trail head when a man and woman approached who were heading back down. The man was large and looked friendly, and broke into a huge grin as they neared. Then, with a booming Australian accent he declared, “Ah – good! You brought breakfast!” The friendly tourists didn’t break their strides, and neither did we, so lord knows what they thought of our stunned non-reactions.

I think we were so shocked that it really didn’t register until we completed our journey. But once we had returned to our rental car, we burst into laughter/tears. The end.

Okay. Back to what you came here to read!

The two biggest “boomerangs” have put me in a position to help others sparkle and shine:

The first was stepping into the role of Chair of the <em>School, Children’s, and Young People’s</em> section of the <em>Nebraska Library Association</em>. If you’d told me at the beginning of my library career (about six year ago) that I’d become Chair of SCYP I would’ve said “<em>Chair of WHAT?! What does that even mean?</em>” Actually, a month after stepping into that role I was panicking with the same “<em>what does this even mean?</em>” question.

Now, I need to take a step back and share something that I’ve debated sharing off-and-on, and finally decided on the <em>on</em> side of things: soon after learning that I had been voted the Chair-elect, I also learned that I actually hadn’t won the election. Someone else had won and turned down the position which in turn made me the “winner.” I wasn’t the least bit mad at the true winner (she’s a really awesome librarian) – it was mainly an ego blow. Plus, I was excited to take a crack at the <a href=”http://www.nebraskalibraries.org/group/SCYP” target=”_blank” rel=”noopener noreferrer”>SCYP blog</a> and see if I could turn it into something good (and that’s basically all that I thought I’d do – heh).

But that knowledge caused quite the impostor flare in me. I had no idea what I should be doing. I skimmed the bylaws and was still like <em>what? &nbsp;</em>And then I got an email saying that I needed to submit my report&nbsp;to the Board Members portion for the upcoming meeting. Rational thought left me and I was like “<em>but what do I even dooooooo?</em>”

Let’s take one more&nbsp;step back to the&nbsp;second karma boomerang: I was asked to lead the Nebraska chapter of <em><a href=”http://storytimeunderground.com/” target=”_blank” rel=”noopener noreferrer”>Storytime Underground</a></em>. It was a great honor and I was incredibly excited/nervous about getting it going. And then when the day came I was greeted with (from my perspective) crickets.&nbsp;<em>IMPOSTER SYNDROME TIMES 2 OMG WHAT HAVE I DONE I DON’T BELONG AAAAAAAAAAAUGH!!!!!</em>

And then I did the wisest thing possible in this situation: I emailed a librarian mentor/friend (<em>you need at least one of those – go find one now – I’ll wait</em>). I emailed her and was like&nbsp;<em>IMPOSTER SYNDROME TIMES 2 OMG WHAT HAVE I DONE I DON’T BELONG AAAAAAUGH AND NO ONE LIKES ME WHAT DO I DOOOOOOO?!?!?!</em> (only the panicking doubt went on for several paragraphs)

And she did the most awesome thing. She wrote an email response that set my feet on a better path – not just in librarianship but in my life. She wrote it throughout the course of a day as thoughts occurred to her (not knowing that my mind enjoys and latches onto the random). I even misunderstood one small part, but through that misunderstanding I came up with my game plan not just for 2016, but my career. Did either of us expect this outcome?

And here’s the thing – the path that I realized that I will likely be taking for years to come (hopefully with&nbsp;some fun side-trips as well), all comes back to steadfastly sparkling. I feel a drive that I’ve never felt before: I want to bring as many YS librarians together in Nebraska as possible. And I <em>especially</em> want to make sure that they&nbsp;are aware that there are opportunities to create supportive personal learning networks where they’ll be safe to share and learn from one another. All of this regardless of education level, size of library, or any other reason they may feel <em>imposterish</em>.

See? I was dead serious about finding a mentor/friend. Again, I’ll wait&nbsp;here. Go out and gitcherself one!

To be more concrete for y’all in case you’re like “get over this sparkle stuff,” here are my goals for 2016 (some of which I’ve already done):

<blockquote>Find every NE public library on <em>Facebook</em> that I can. <em>Like</em> them both as myself and on behalf of our library. Y’all should seriously consider doing this. It’s really opened up my eyes to so many libraries doing great things. Even where the entire staff consists of a Director and the Director’s Assistant.

Being the main person overseeing our library’s Facebook page, I can tell you that a single “like” can immeasurably brighten my day. So, to share that sort of delight with&nbsp;someone else out there? It’s awesome.</blockquote>

Also, it leads to my next goal:

<blockquote>Through the Nebraska librarians sharing their fun programs online, I then find the email of the YS librarian who ran the program (or failing that, I reach out to the library’s Director – after all, wouldn’t it be amazing to have your Director forward you an email from an NLA Board Member wanting to learn more and&nbsp;<em>share&nbsp;</em>their event on both the SCYP blog as well as in our local Storytime Underground chapter?).

Which can lead to those librarians joining SCYP and/or StorytimeU NE. But if neither of those things happen? Then I know that somewhere in NE someone is hopefully pleased to catch the eye of someone “important.” &nbsp;Heh.</blockquote>

<blockquote>I’ve been creating an epic spreadsheet of Nebraska libraries breaking them down into who belongs to the NLA/SCYP, the YS librarians (if any) or Director, and their contact info. I’ve already gotten through the hundreds of SCYP members, and am currently into the&nbsp;<em>E</em>’s of Nebraska cities. Yes, by the time I’m done I’ll have around 500 contacts. Yowsa! But cool.

And what will I be doing with this epic list? I’m hoping to write a nice note to libraries/librarians not a part of the NLA letting them know who I am and why I care who they are.</blockquote>

Let me tell you what: I’ve already reached out to a handful of libraries who aren’t in the NLA, but that have shared great ideas on Facebook. I’d say that I’ve gotten a response from about half. But of those half? They’ve been <em><strong>FAB-U-LOUS</strong>&nbsp;</em>and any doubts that I may have had about sending out “cold emails” have evaporated.

And that about rounds out my resolutions to rock for 2016.

It’s gonna be an interesting year – I hope!

If you’re a librarian or a Punk Rock Book Jockey prepping for the upcoming CSLP theme of Build a Better World, and you don’t want to use the artwork provided (or want to beef up what’s provided), then do I have some art for you! Also, don’t feel limited by this summer’s theme with these…

<img class=”alignnone size-large wp-image-2128″ src=”http://hafuboti.wpcomstaging.com/wp-content/uploads/2014/09/faculty-setup-pic.jpg?w=584″ alt=”” width=”584″ height=”413″> This fall I finally got a program up and running that I’ve wanted to do for a while: Faculty Card registration/renewals <em>at the school</em>. Now, I know this isn’t revolutionary, but between feeling like the schools no longer welcomed us, and the fact that it’s tough for…

Ludy Rueda’s friend Tatiana Samokhina provided me with a Russian translation. Thank you, Tatiana!!! Eirini sent me a suggestion for a different Russian word choice that I made an error on, and Alex pointed out the error. Teamwork. Thank you, Eirini and Alex!!! 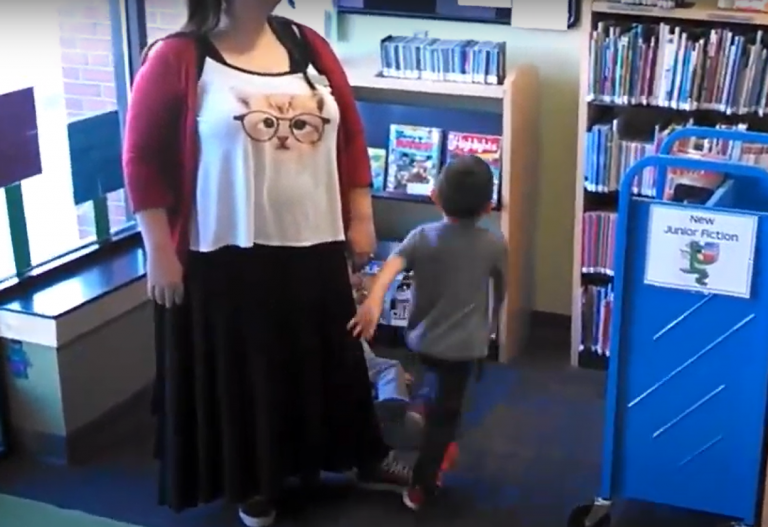 Back in April a group of amazing librarians and I received an unexpected invitation from Bryce of Bryce Kozla Blog. She was wanting to know if we’d be willing to put together short videos for her team members out in the Washington County Collaborative Library System (WCCLS for short – be sure to check out…