This post is meant to be an overview, and not a blow-by-blow breakdown of how we did it. If you have any questions whatsoever about anything you see here, there, or anywhere on my blog, then don’t hesitate to ask me! Either on social media, or at [email protected]

I must give credit to my right-hand assistant and amazing artist team member Natasia. She created, from start-to-finish, almost all of the décor you’ll see here. More credit goes to her for taking and sharing most of the photos in this post.

Now onto the themes! 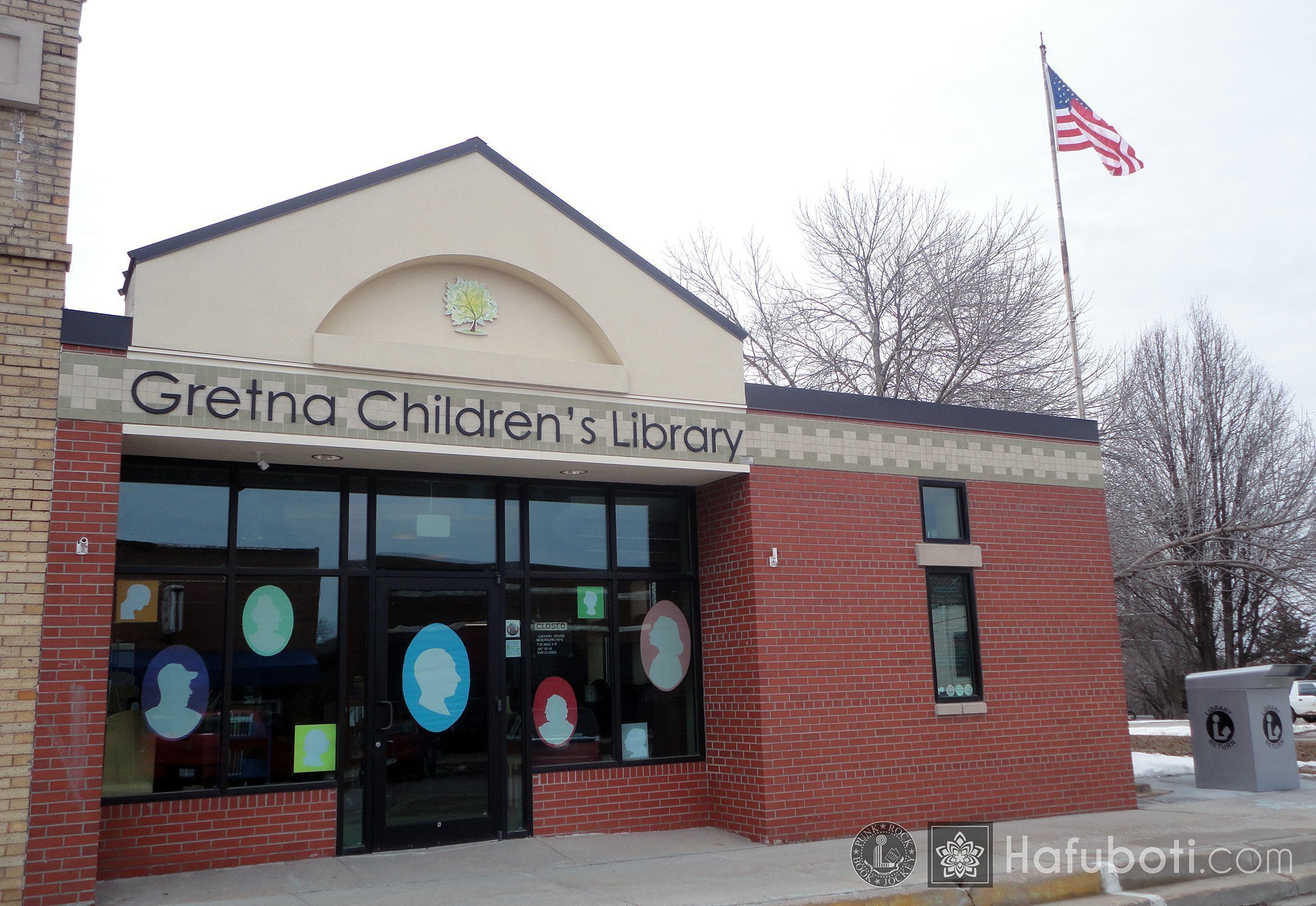 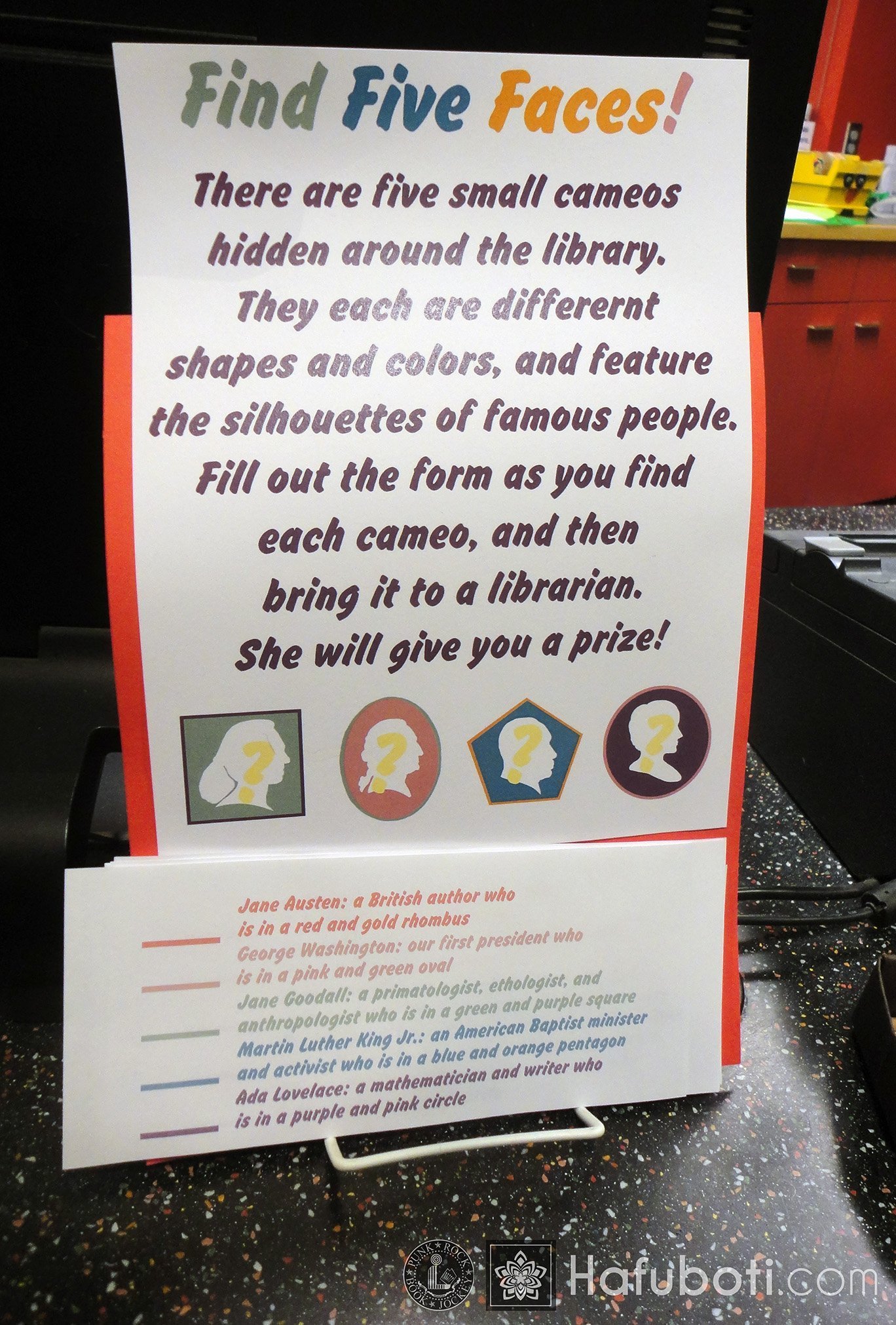 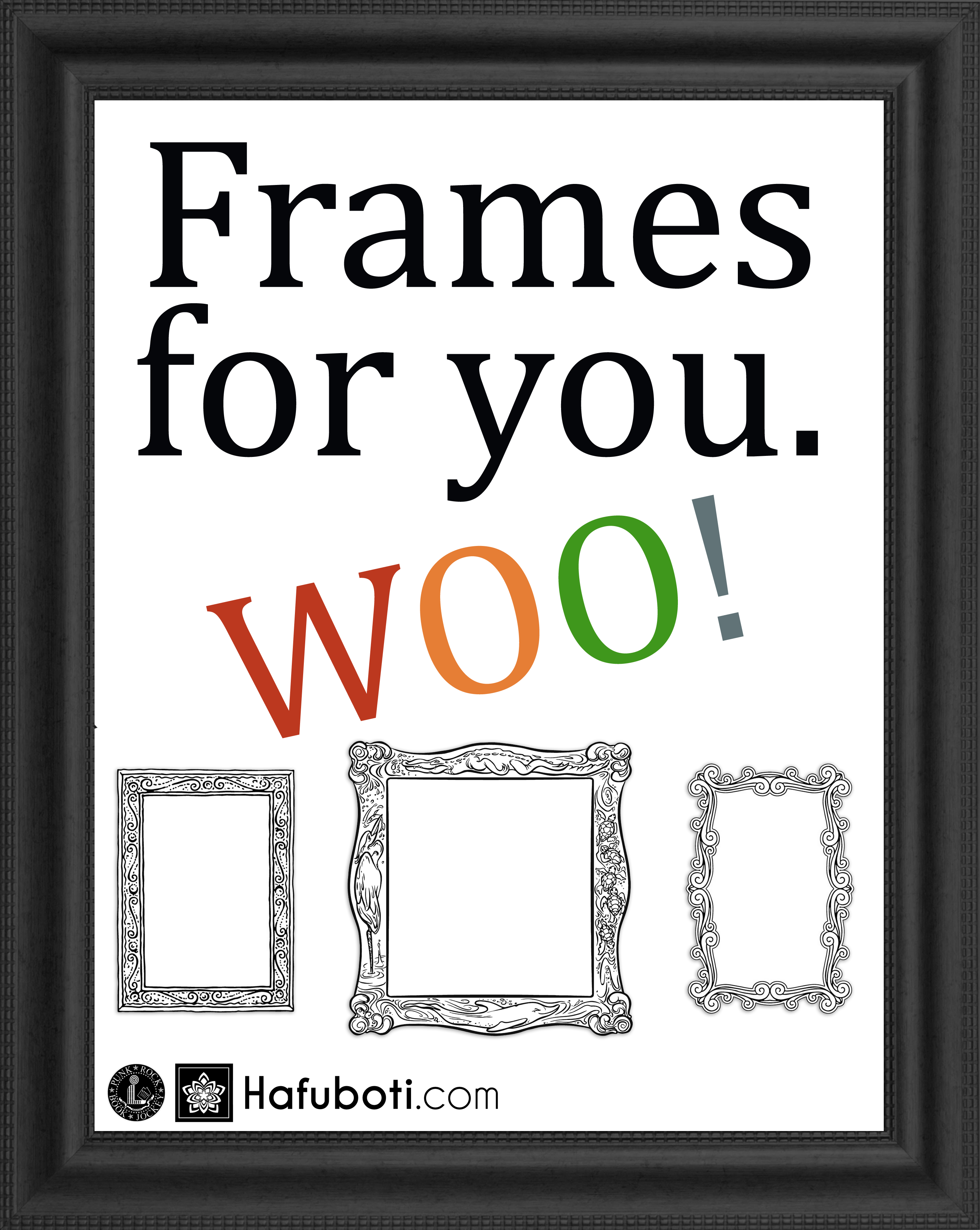 This is a lost theme. Neither Natasia nor myself could remember what we did – it’s the second February that’s been “lost.” D’oh! Maybe we should have done our mystery theme in February instead. 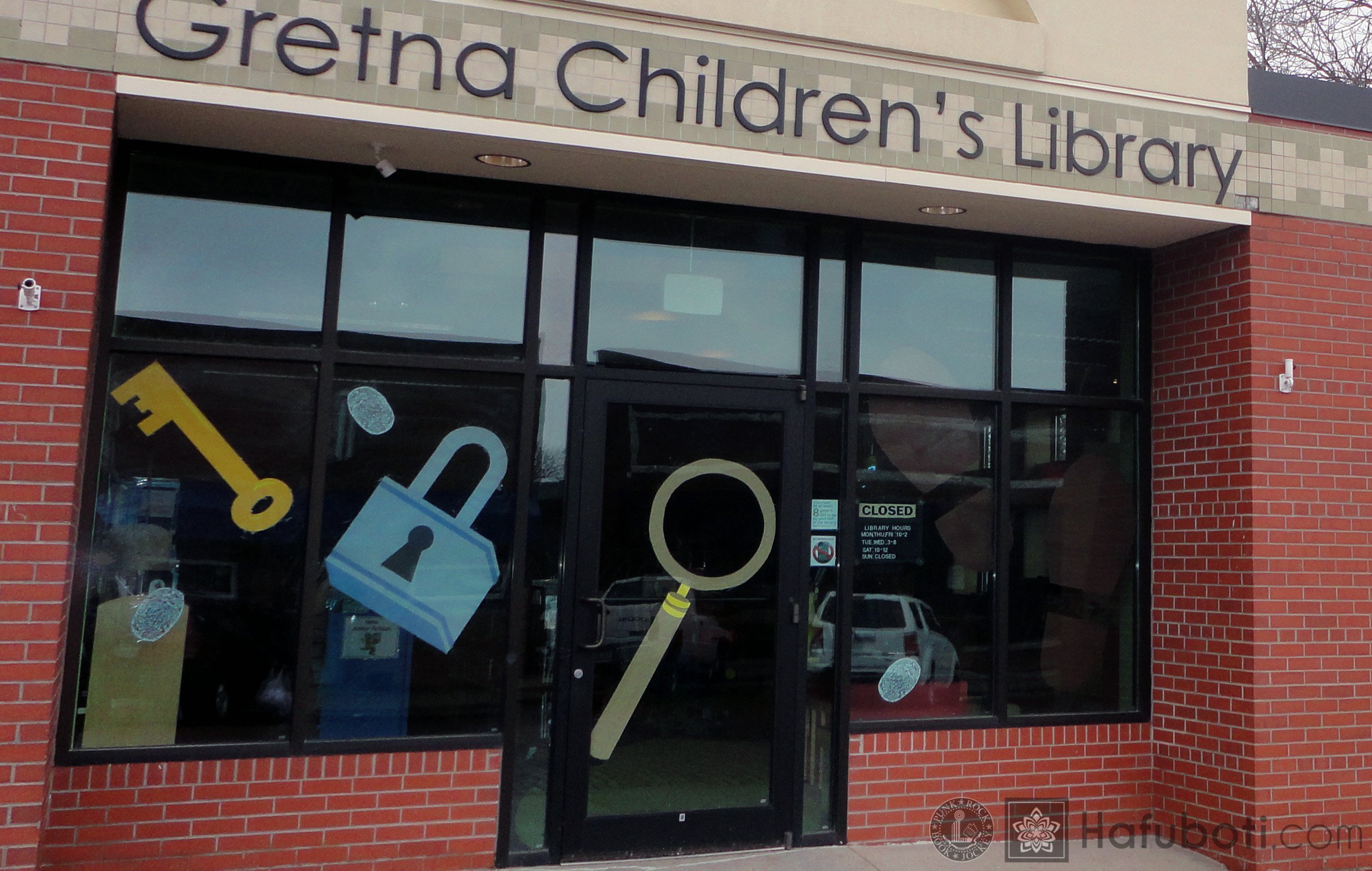 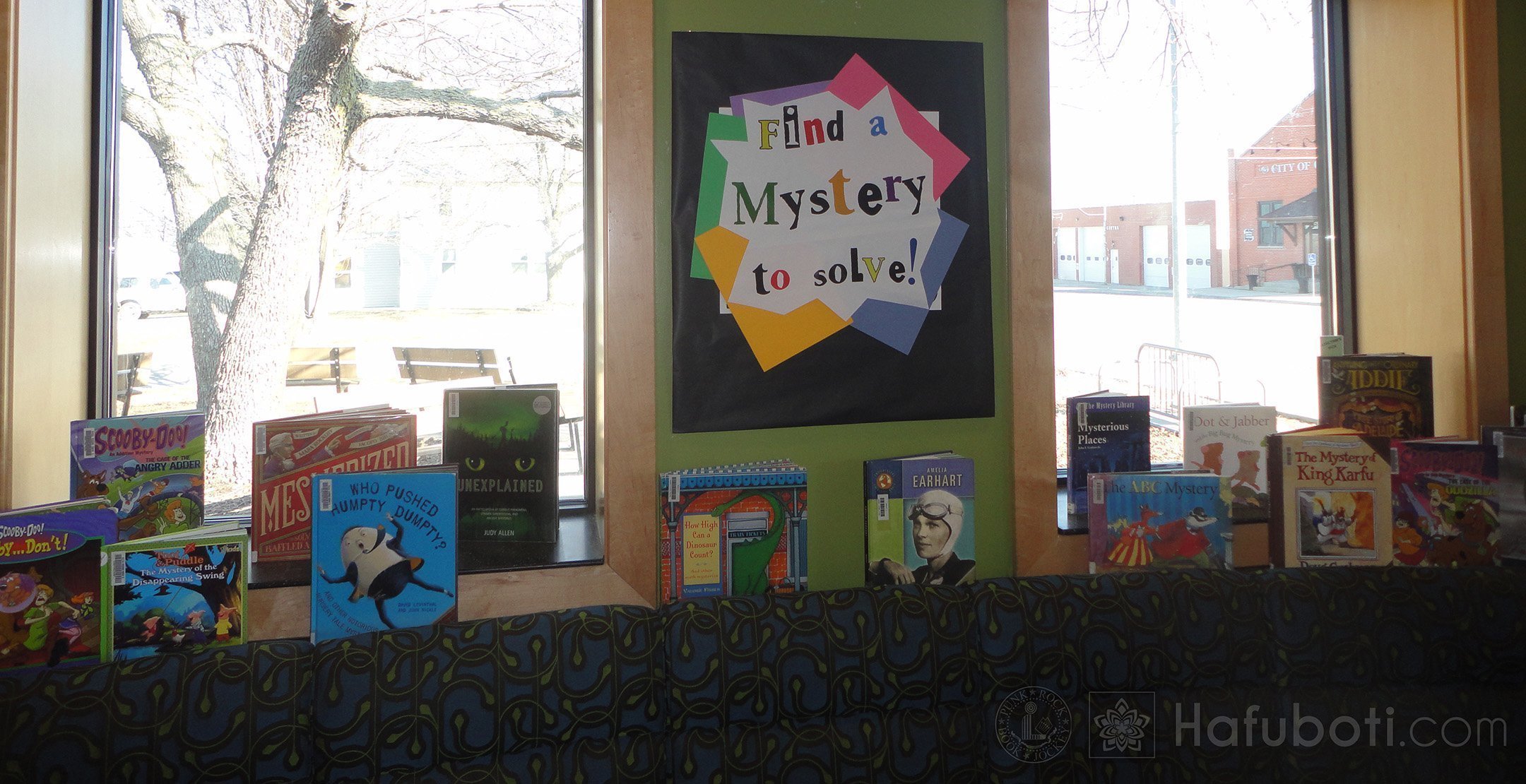 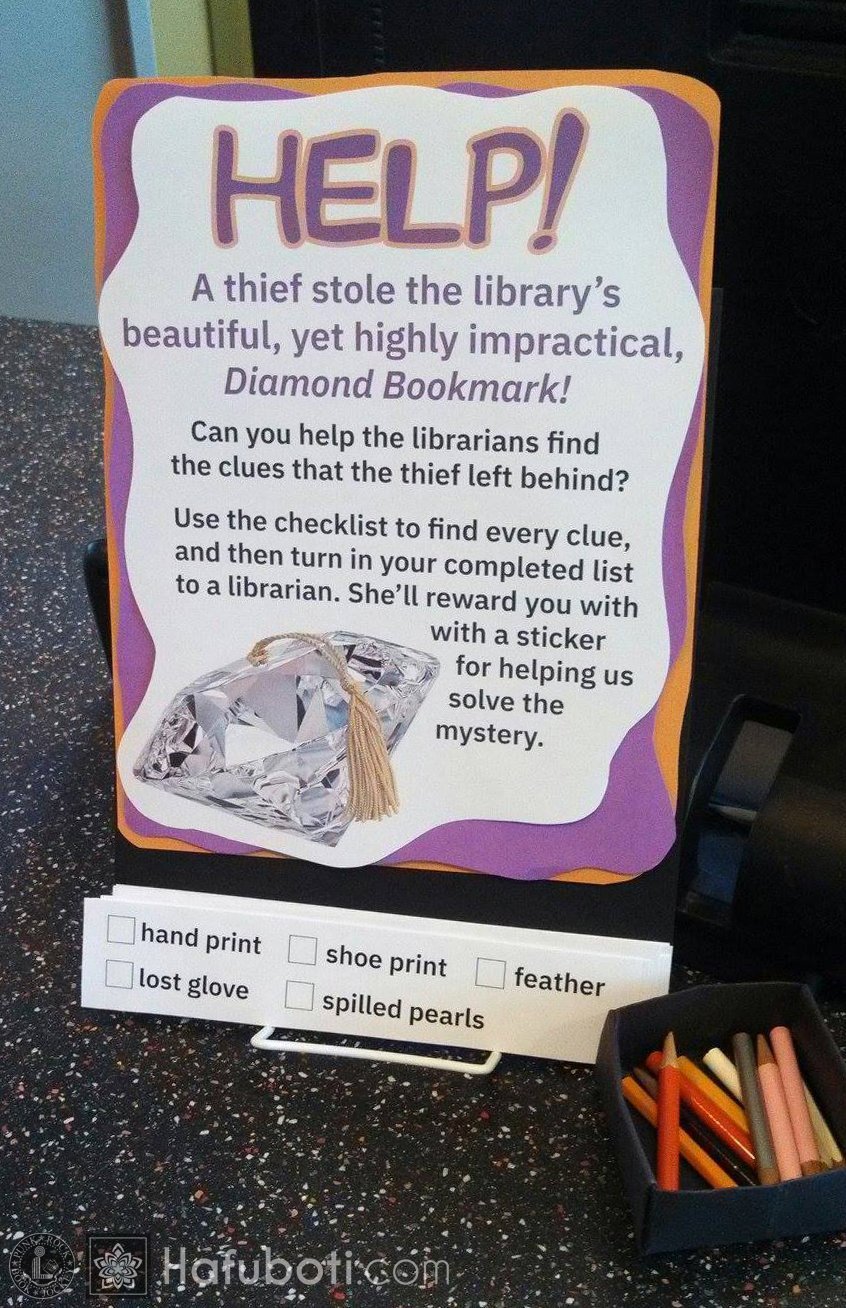 Our reading bench display was constantly needing to be refilled. I believe that by the end of the month we were adding junior fiction titles to it (like Nancy Drew and the like).

And our scavenger hunt was pretty fun, but had the issue of kids thinking that the clues were in the front windows.

The best part was hearing how parents or caregivers would read the sign. What can I say? The opening line is great.

Again – I forgot to save any part of this hunt except for photographic proof that it existed. Sorry about that! 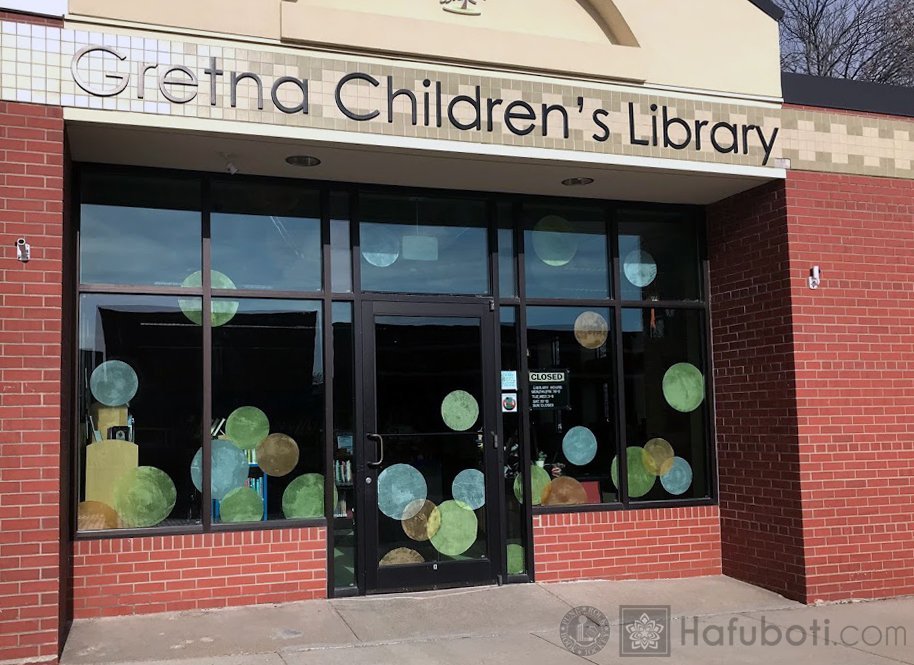 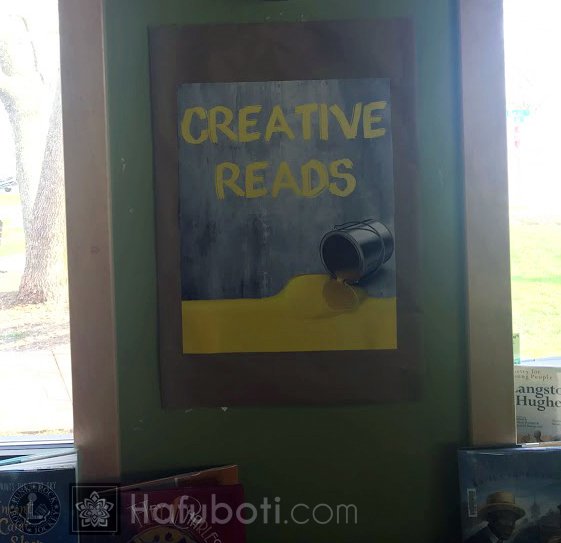 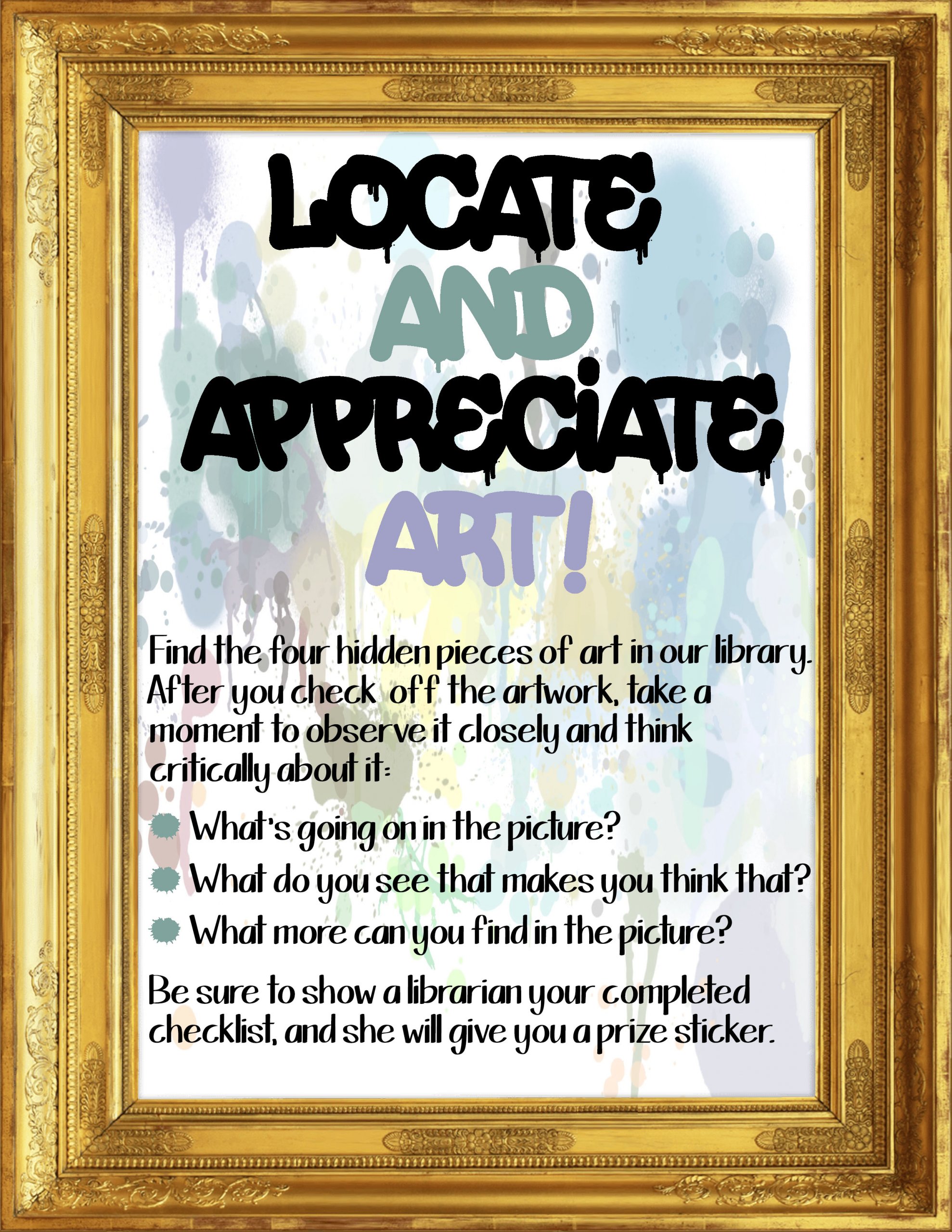 Natasia had fun being artsy for our final Artsy April. It wasn’t that we hated the theme, it was more like we had so many other themes that we’d rather do instead.

We had a good time with our scavenger hunt and switched out the sets of paintings each week so that there were four different hunts through the month.

Click on the image to the right in order to get everything you need to run your very own art appreciation scavenger hunt! 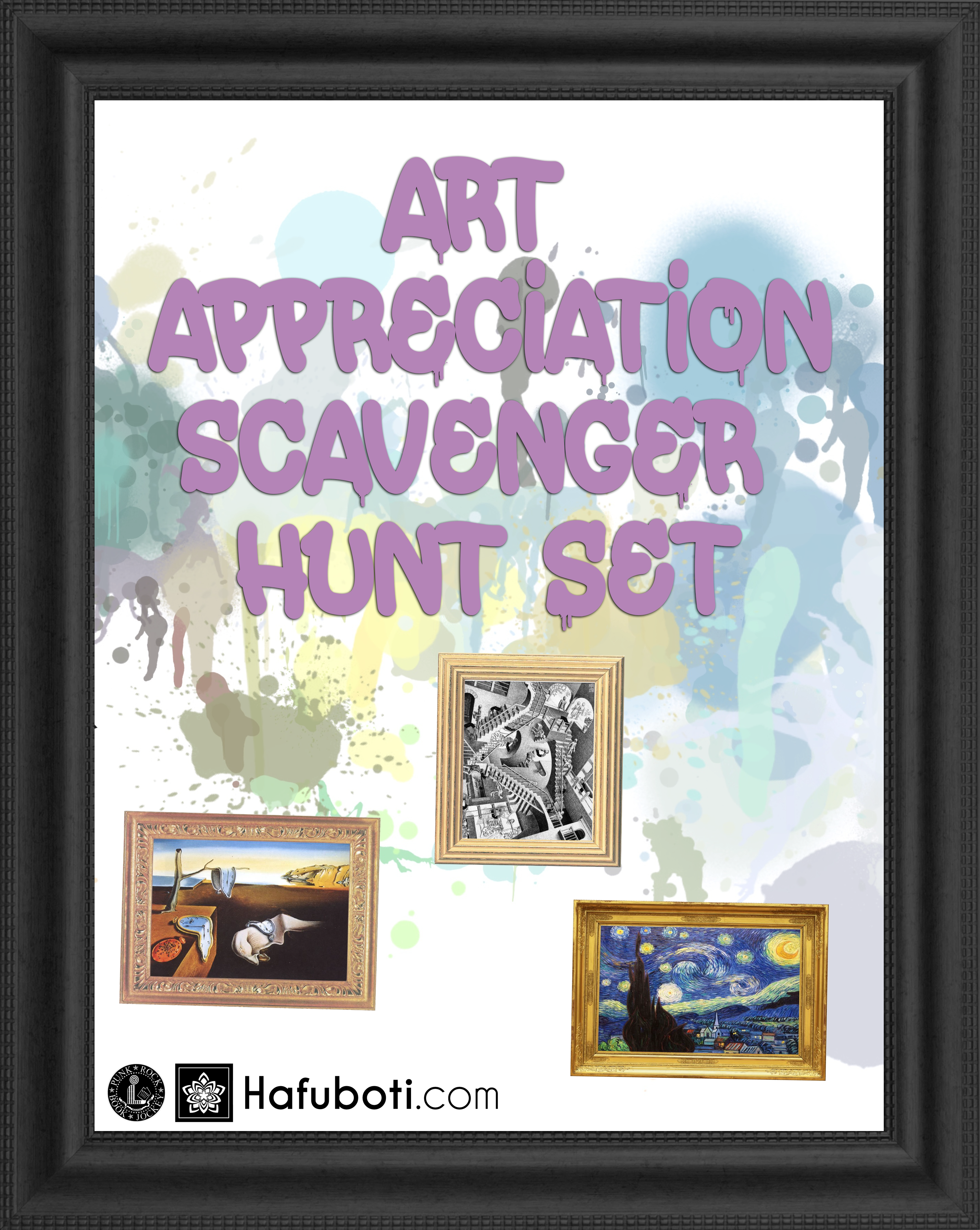 Natasia created this gif, and was a blast to share online with our patrons, and now with you, too. 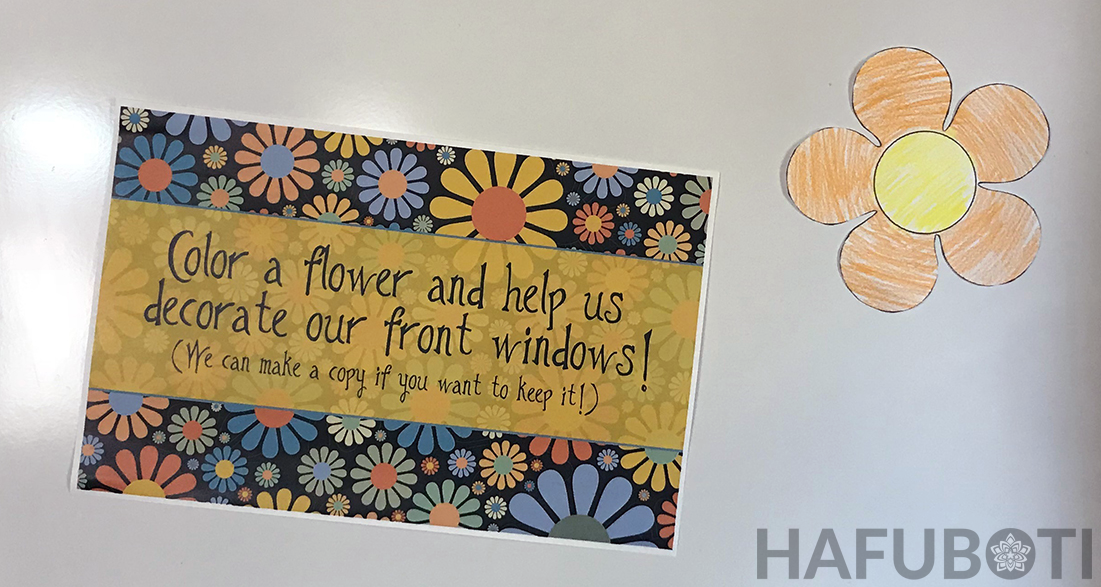 Natasia had hoped that May would be a less-stressful theme by having kids and caregivers color two styles of flowers that we had at our activity tables.

My favorite flower design was by our Library Page at the time, Wendy. I ended up laminating her Totoro flower as soon as it came down, and it’s on our office wall. 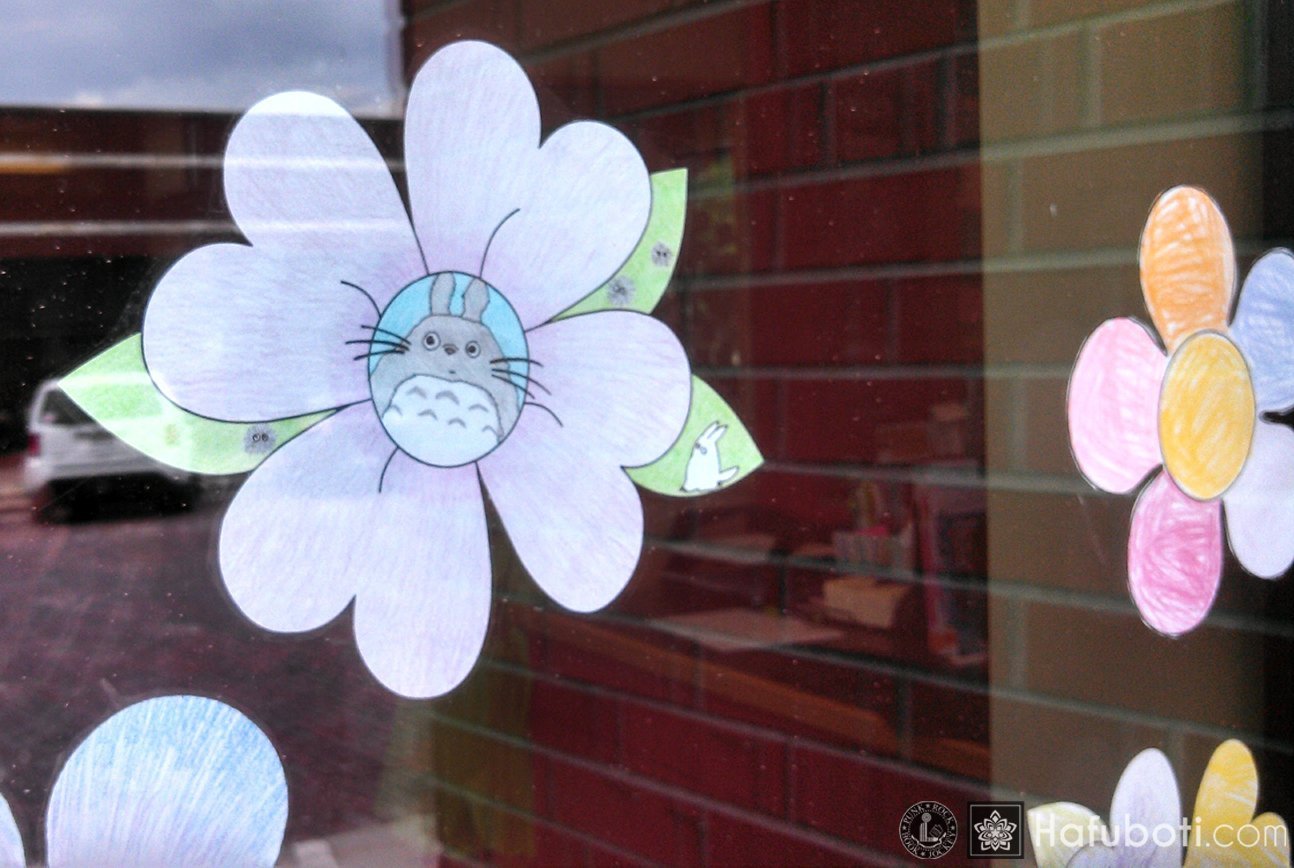 But, you may have caught on that I said hoped that this would be less stressful. It was a great theory, but she ended up (even with us all trying to help her) spending a lot of time cutting out flowers instead of working on the upcoming summer’s theme.

I could find neither the sign for our scavenger hunt, nor the game pieces. But I found what our checklist looked like (above). So it was a simple five-flower game. We found that five was the ideal number of items to look for: not overwhelming to the kids, and not over-long for caregivers. 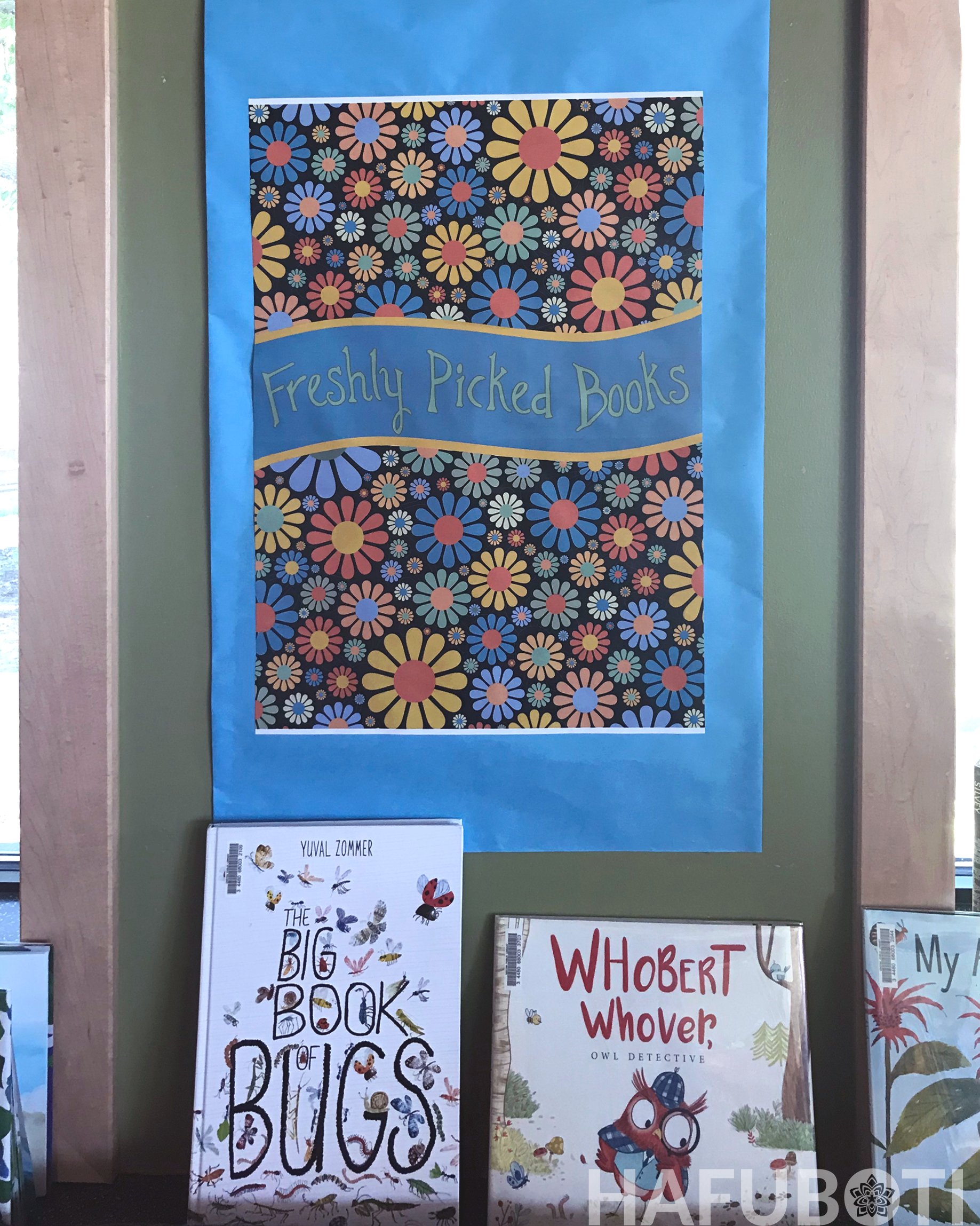 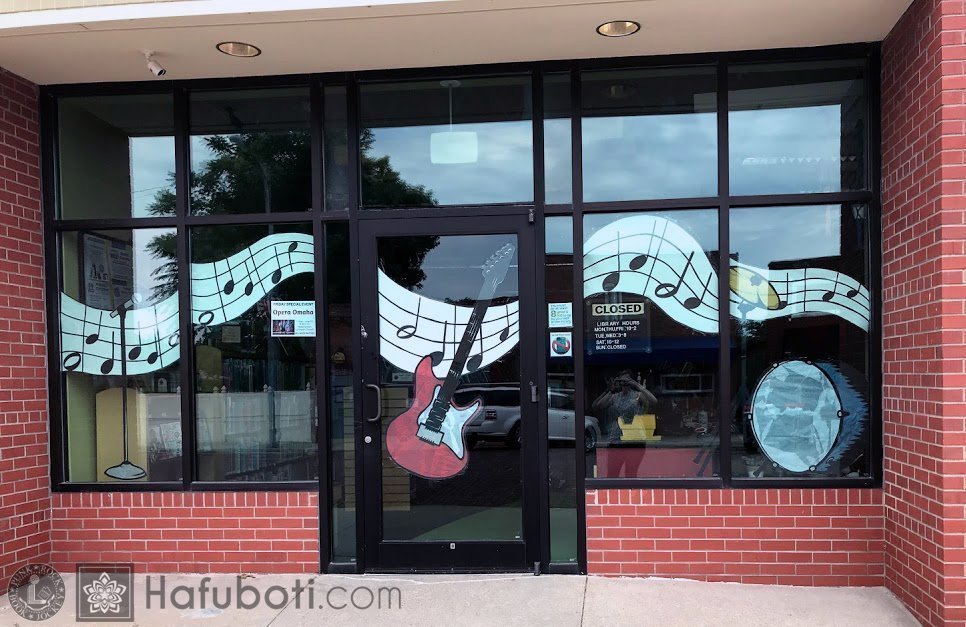 Honestly, the summer of 2018 was an absolute blur. I was Acting Director (my Director was on maternity leave), we had just lost our Young Adult Librarian to a full-time library job elsewhere, I was President-Elect of the Nebraska Library Association during one of its most tumultuous times, and my husband and I (after our landlord unexpectedly decided to sell the house we were renting) went through the process of buying our first home and moving into said home. ::eye twitches::

But you’re here for the themes, so let me get back on track. 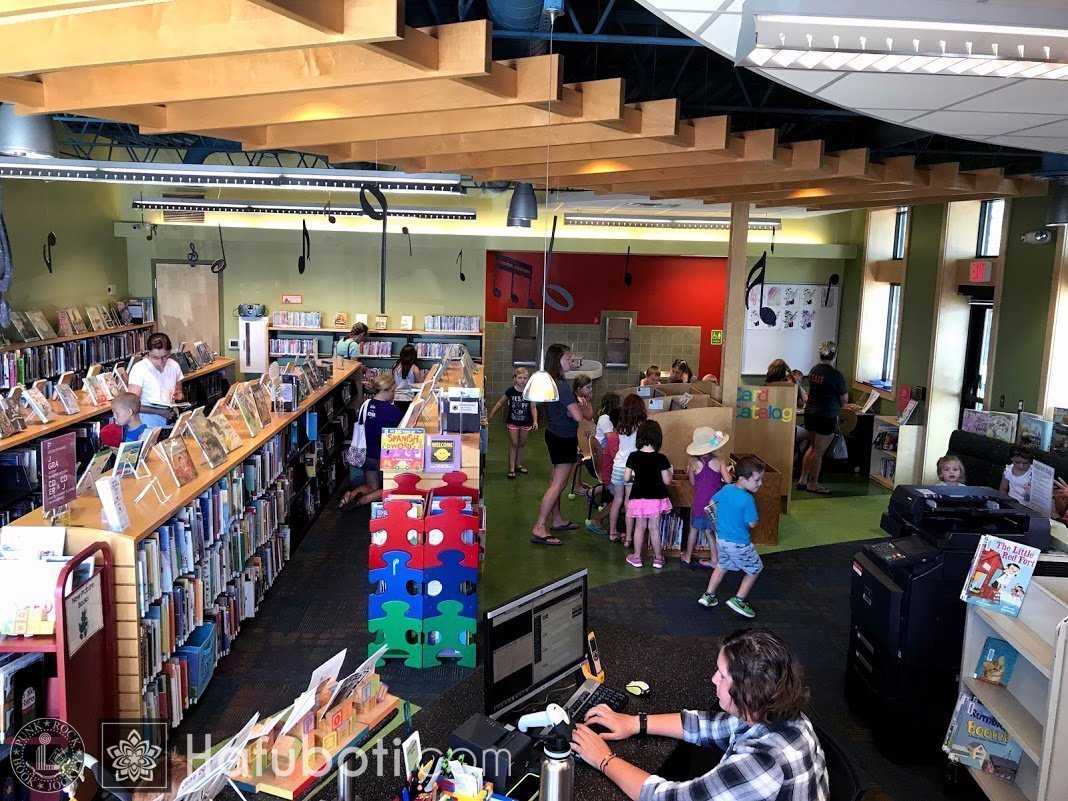 In the above photo, you can see that there are music notes hung from the ceiling with fishing line. Well, you can’t see the fishing line (that’s why we use it), but you also can’t see the glitter on the notes. So not only did they twirl in the air currents, they also glittered. They were one of the bright spots during this difficult time.

If you look closely at the back of the building on the right-hand green wall – that’s where our whiteboard is. You can see some completed coloring sheets taped up on it. It’s not large, but kids LOVE seeing their work displayed.

August 2018: Our Library Is Doggone Great! 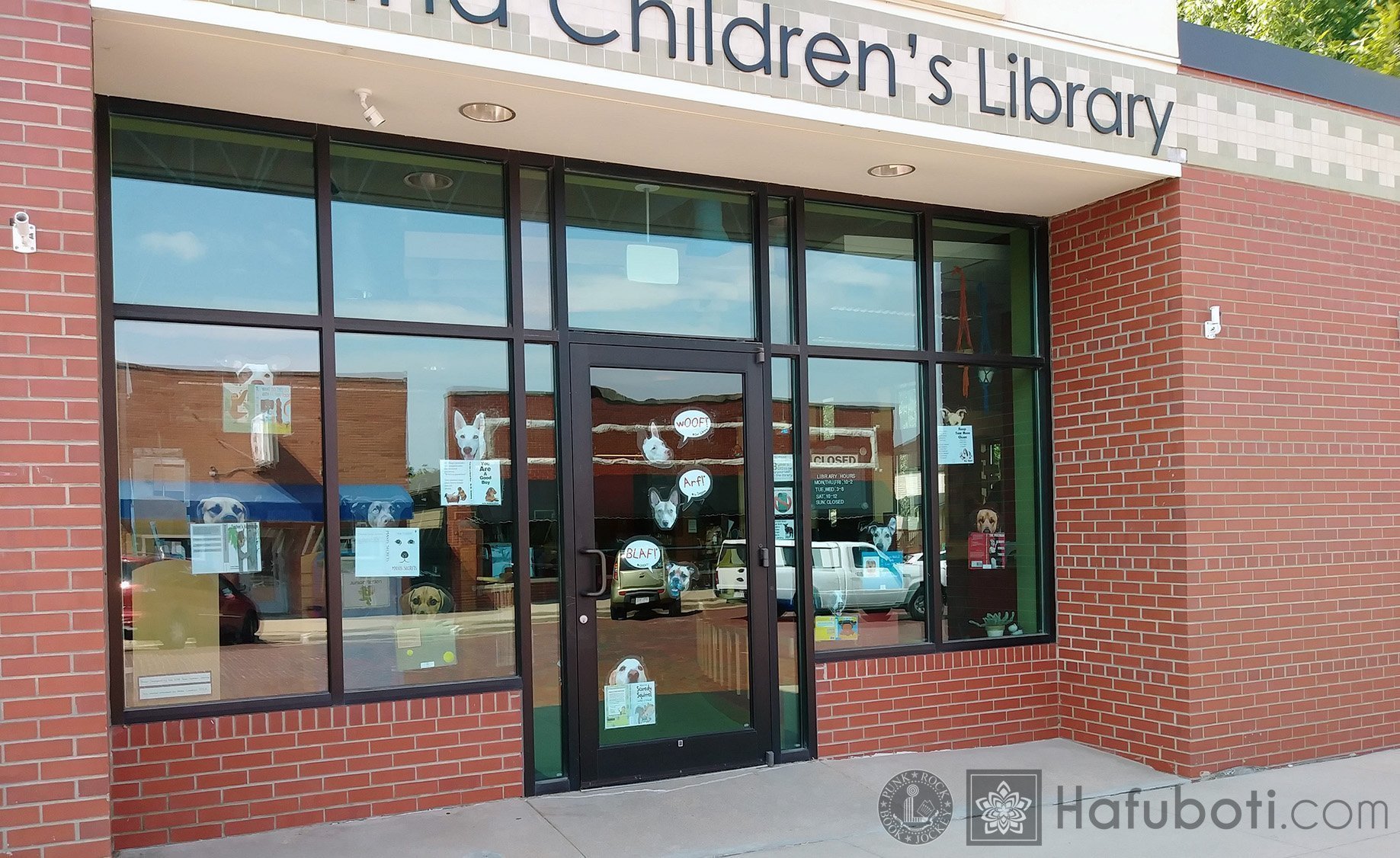 I’m a bit embarrassed that I was the most involved in this theme, and it’s the one I took the most pictures of. I can has ego. But, this theme was created by the teens who were in our Teen Summer Internship program.

The teens decided that for their big project, they’d be creative directors for one month. Based on our discussions of advocacy, they came up with “Our Library Is Doggone Great,” and to have a dog walk to benefit our Library Foundation. Unfortunately, for all the reasons I mentioned in June/July, helping to organize that awesome idea for an event was beyond me. At least we were able to get up the décor that they had helped to created, and shared it with our community. 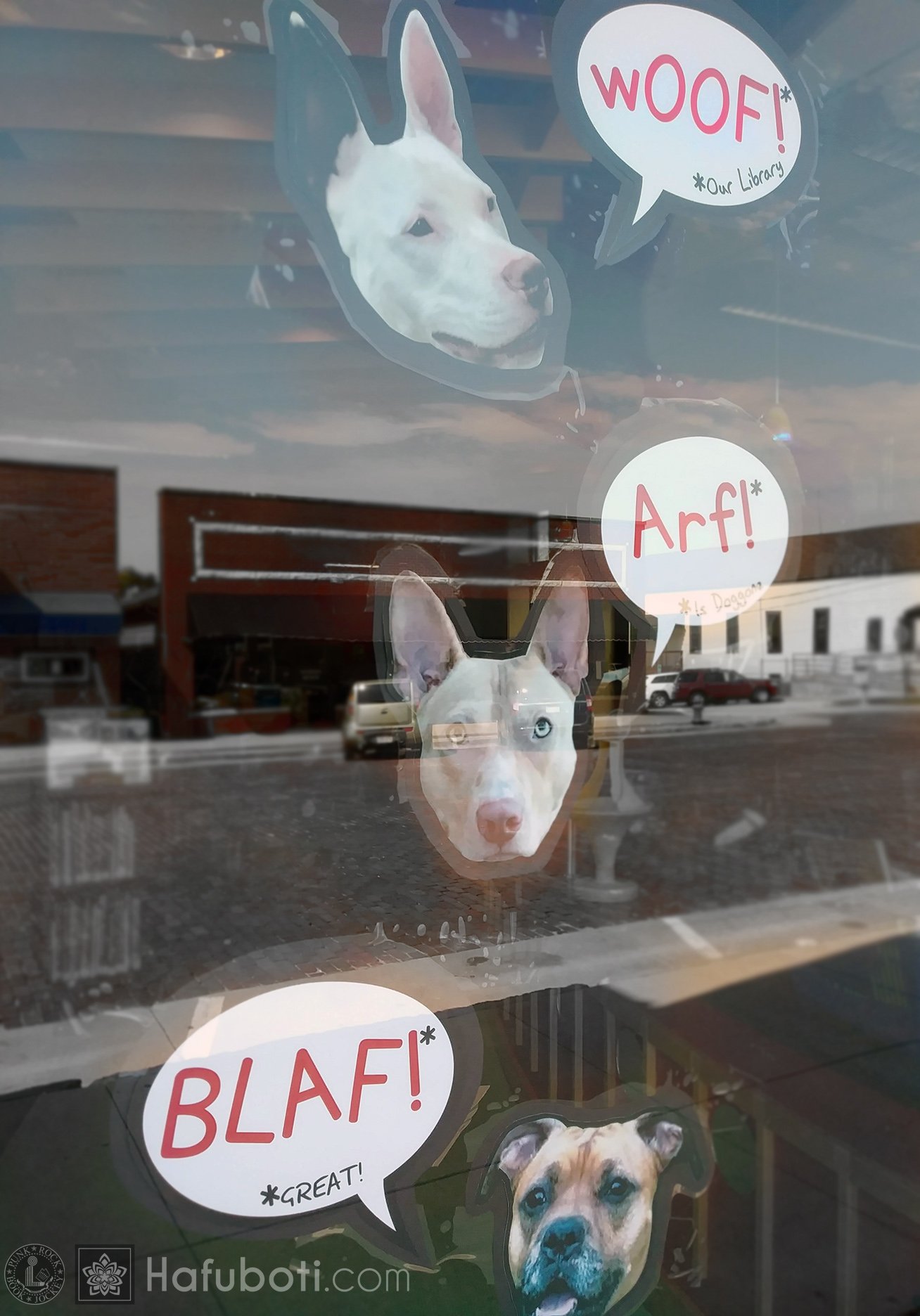 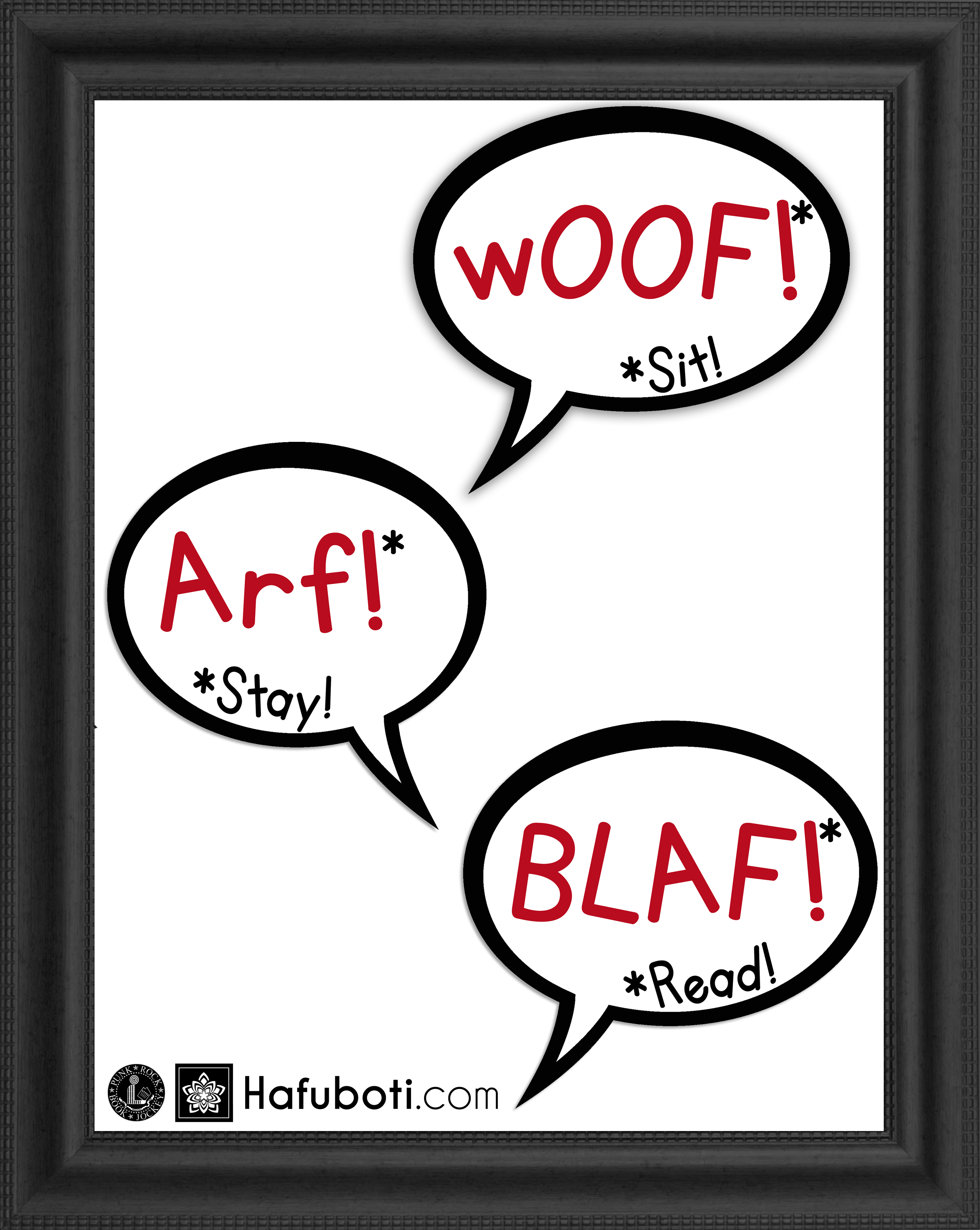 You can get your own “translated dog” word balloons if you click on the above framed word balloons image. You’ll get both the sit, stay, read and the our library is doggone great sets. Yay! 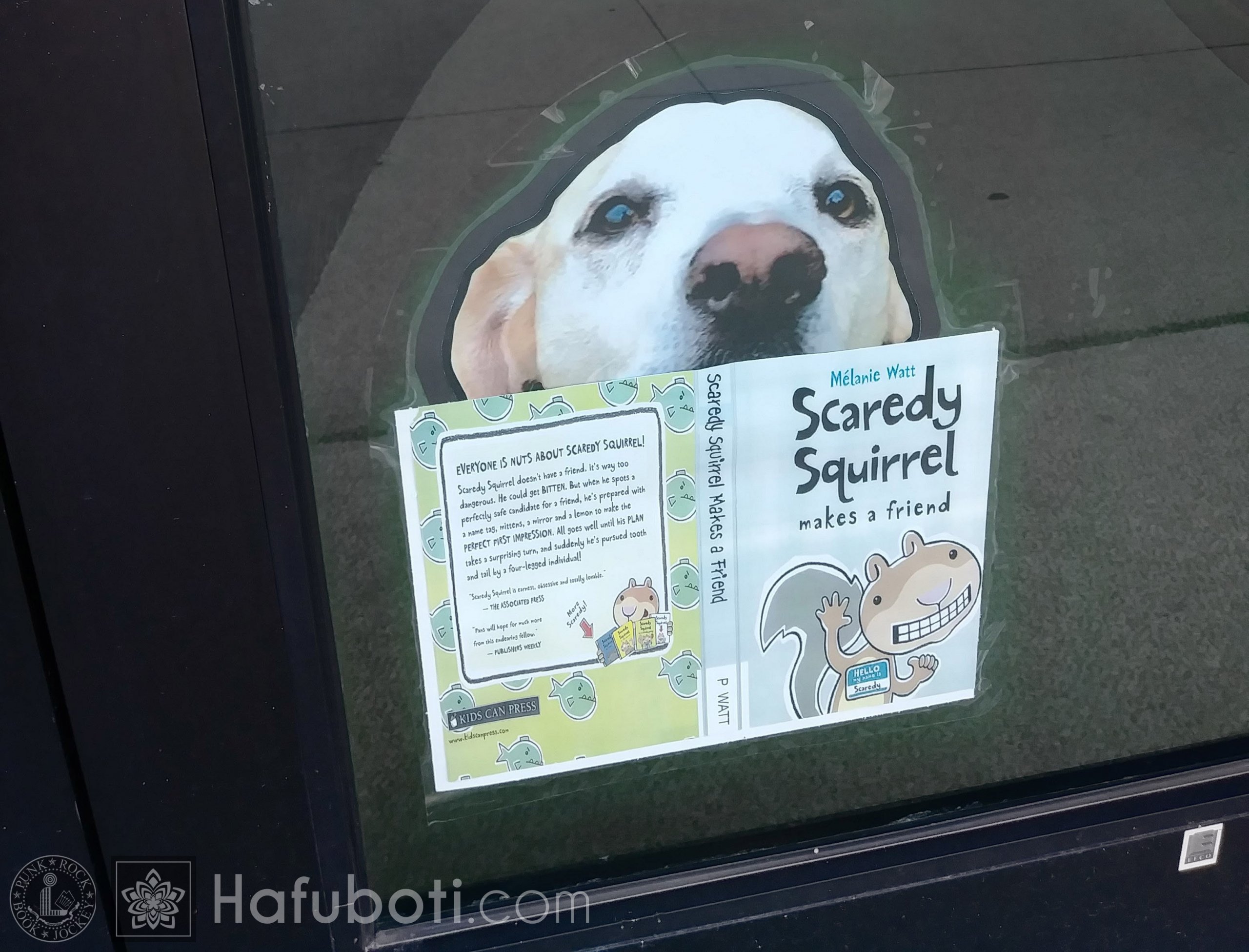 An intern’s aunt works for a no-kill dog shelter, and supplied us with great photos. So I taught the teens some basic Photoshop skills, and they each got a chance to create their own dog face. Yay! Then I finished ‘shopping the doggos, and then had fun turning real or imaginary books into something fun for the dogs to read. On the exterior, the books were flat, but on the inside, we folded the book covers along their spines to give the books a fun 3D pop appearance. 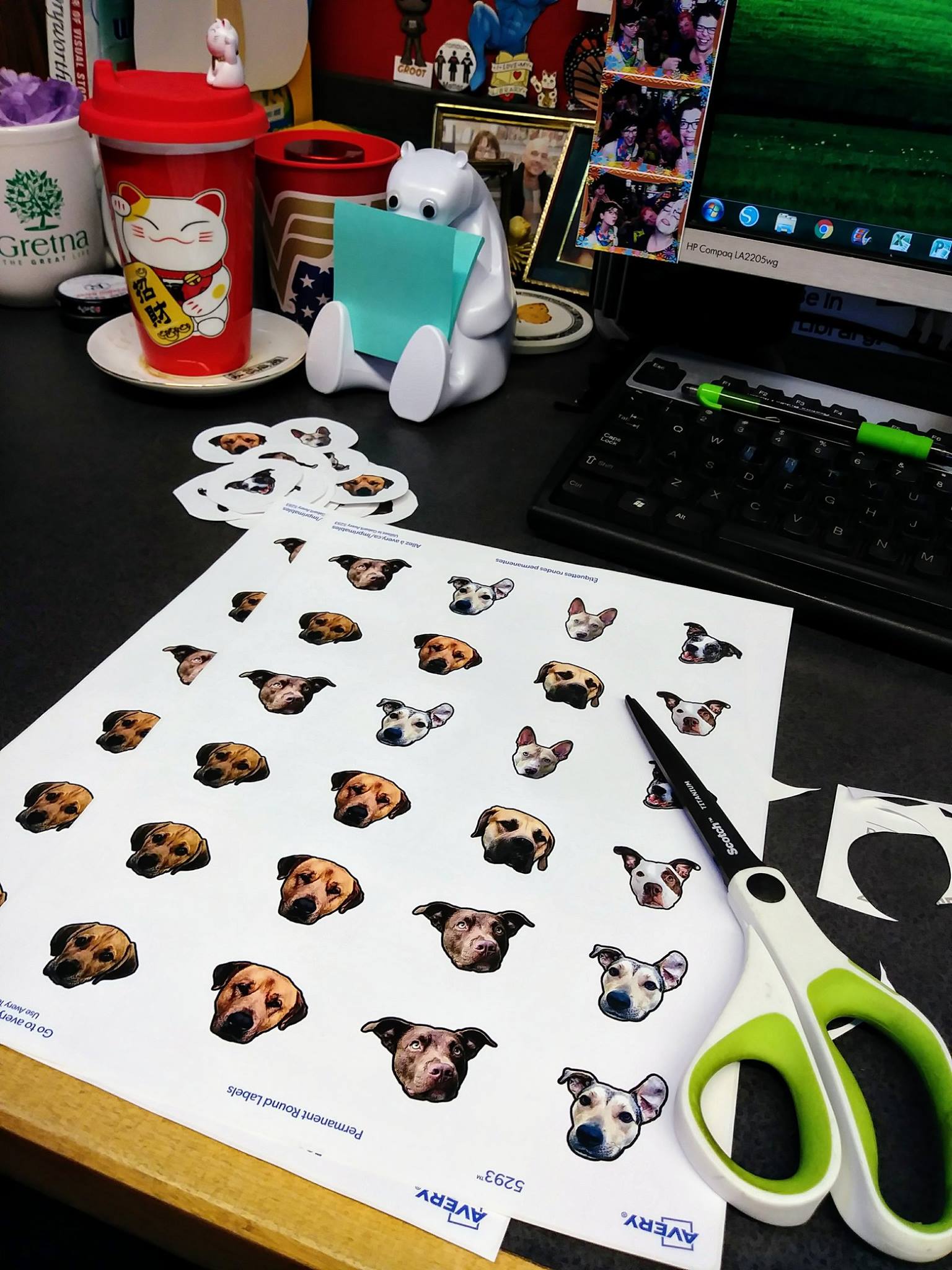 I rarely include a photo of the prize stickers that we make for almost all of our scavenger hunts. I don’t know why I don’t think to share those. Thankfully I got a shot of the ones for this month.

These dog stickers are the “large” round stickers that we use occasionally. We cut them out individually so that they can fit in small bowls next to each circulation desk computer.

In general, we use spine labels with images printed on them. You would not believe how popular our small stickers are. They’re wildly popular. See October’s theme for an example of what those type of sticker sheets look like.

Click on either image below to get your own sets of either fun dog books (some real, some that I made up), and dog faces! Or both!

We took our annual break from themes.

The following year, we took the break before summer so that there was more time for summer décor prep. That was a good idea. 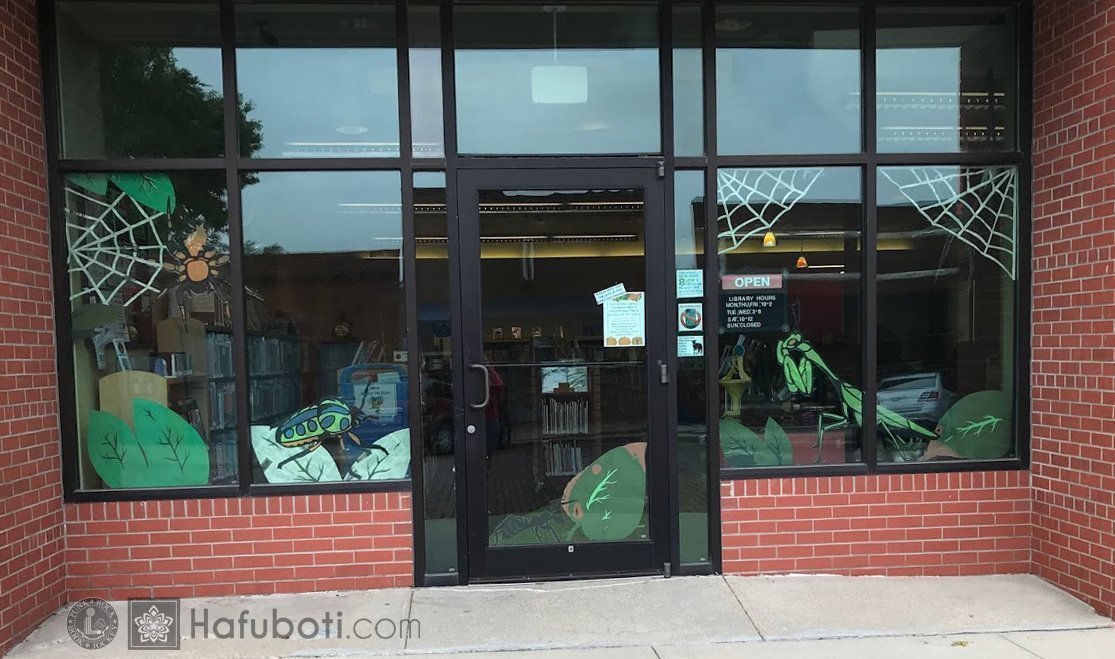 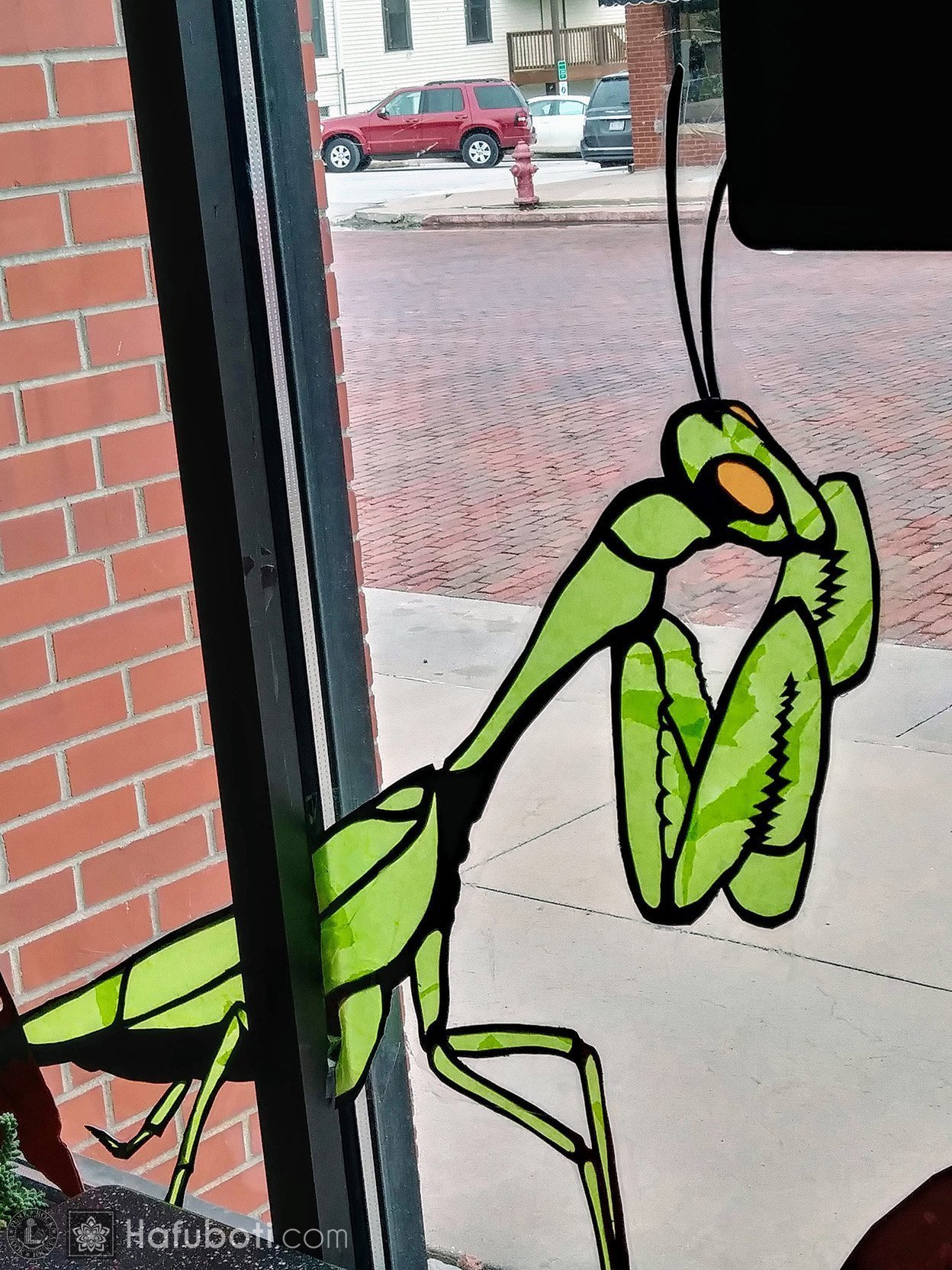 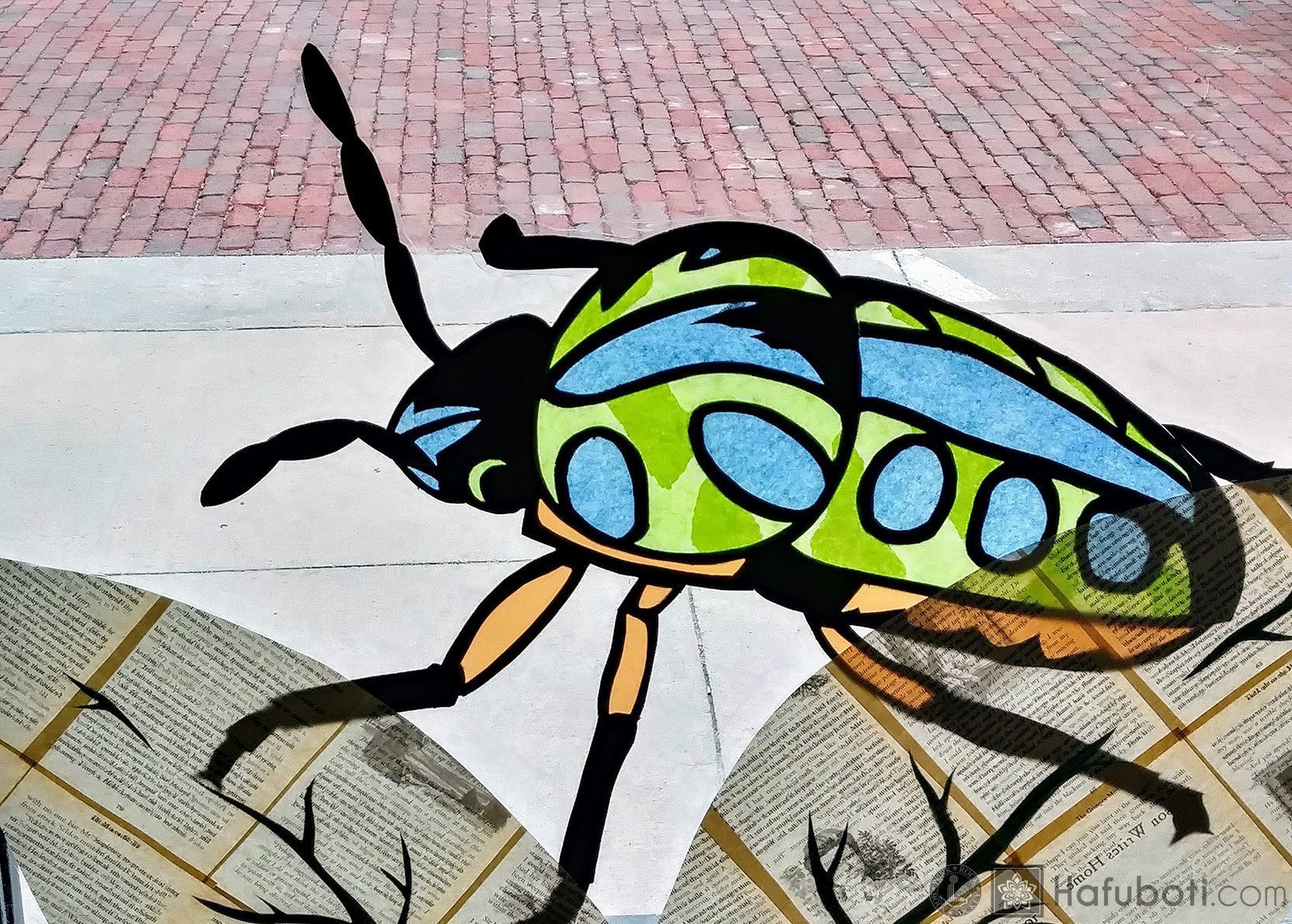 Having freed ourselves from holiday themes years ago, we continue finding fun ways to acknowledge the season without alienating anyone. Well, this time we may have alientated those with arachnophobia.

Natasia’s skills with tissue paper, cardstock, and pretty much anything, are always incredible to see. These photos don’t do her work justice.

Oh and look – ’tis another scavenger hunt that I can’t fully share because of my forgetfulness. But I do have a closeup of the check list. Would ya lookee here – five items to find. Again.

Below you can see what our spine label prize stickers look like. We usually cut up a page like this into smaller selections to help with both space, and children’s decision-making. 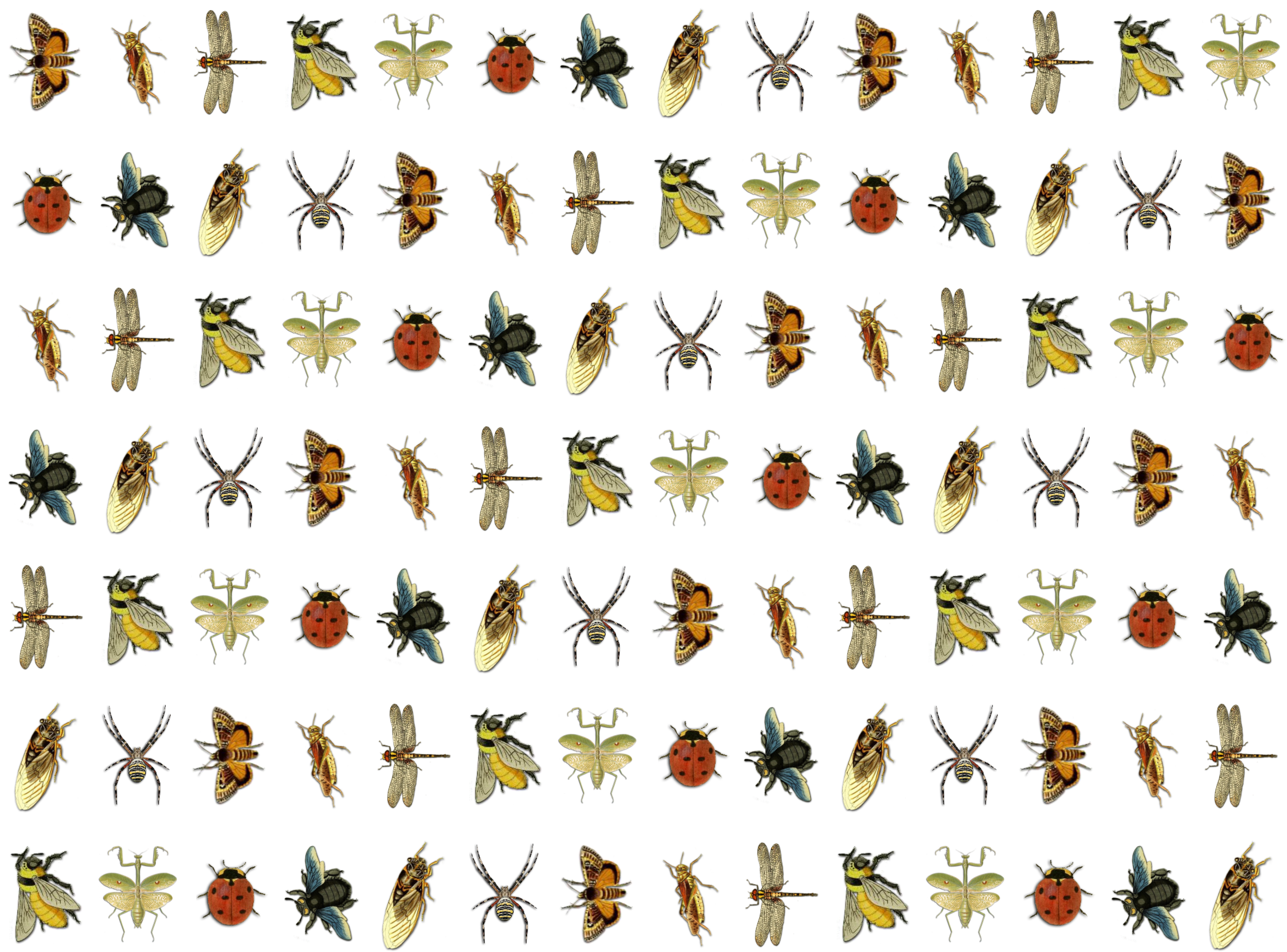 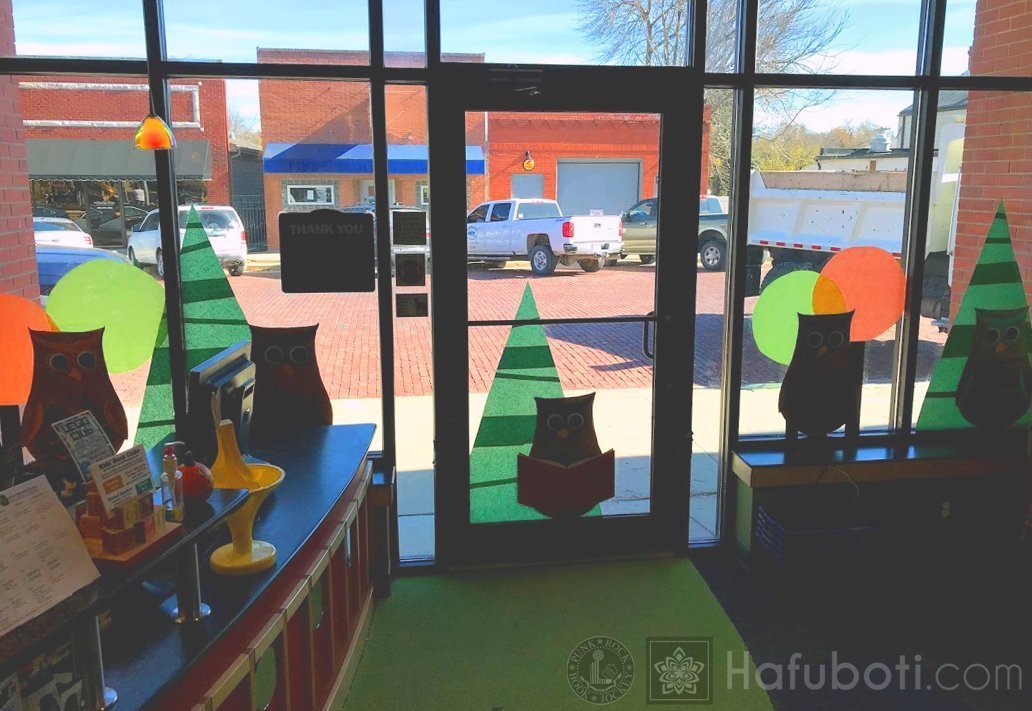 I wish that there was a better photo showing the gorgeous front windows that featured owls reading books in the woods. We only had the one above, and I had to boost the light and saturation a lot just so you can maybe get the gist.

Thankfully, I took a good picture of the owls before they were put in the window. 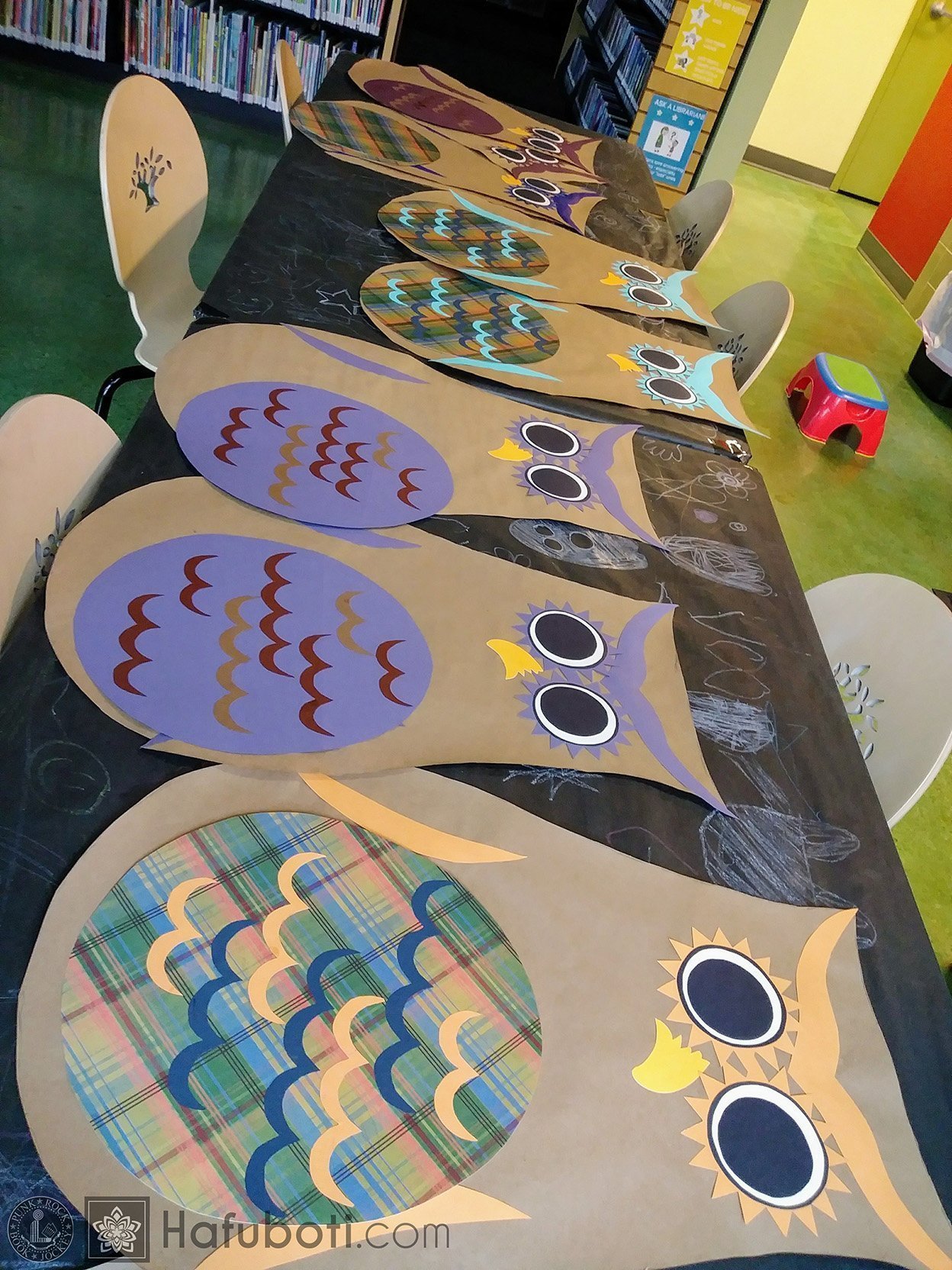 Natasia’s amazing work inspired me to create some coloring sheets for the activity tables. And I’m happy to share them with you, too. Just click on the below image for your very own set. 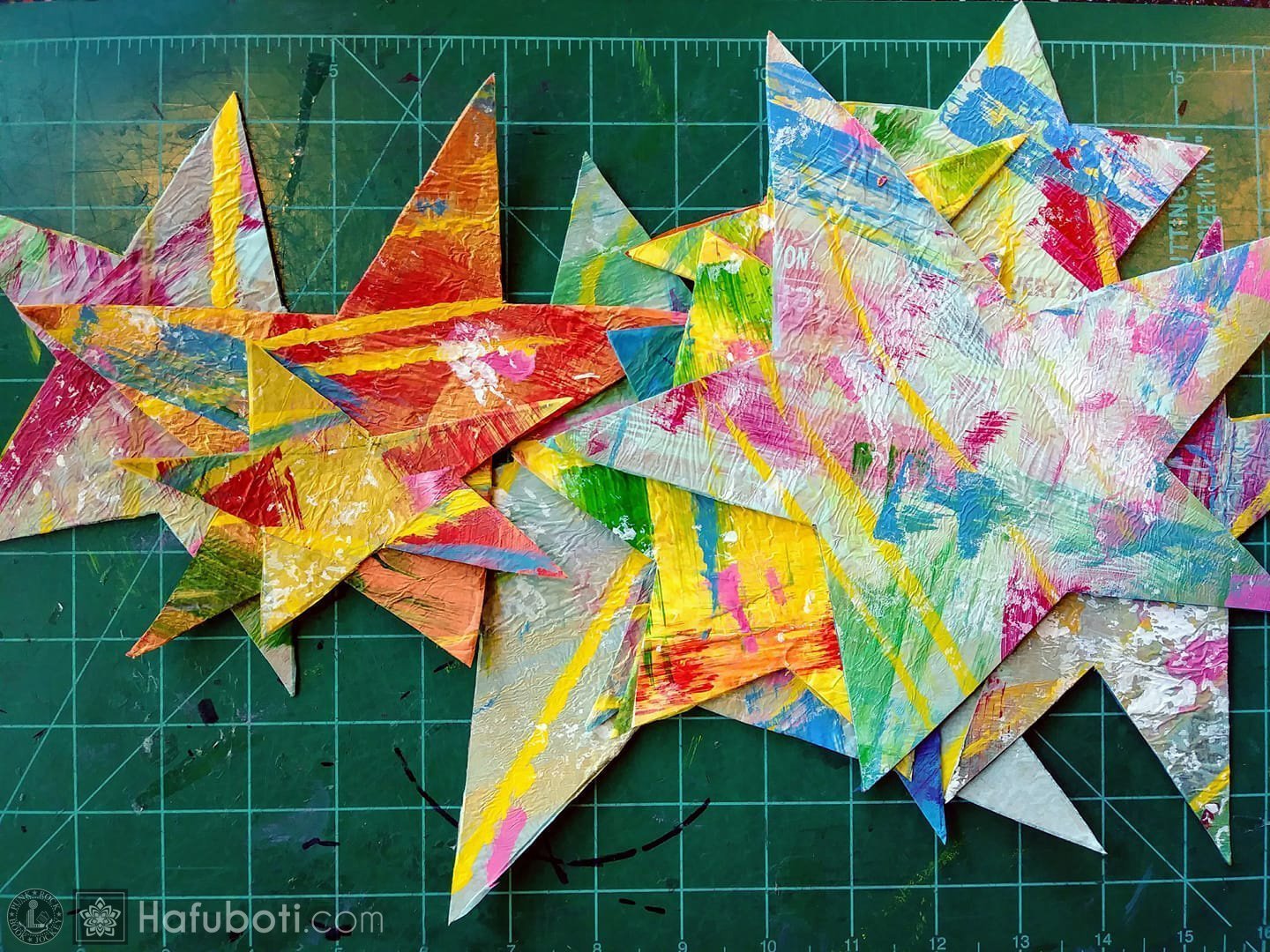 Natasia made these really beautiful stars using Eric Carle’s technique with thin cardboard, tissue paper, and paint. The above stars were just a few that were hung from our ceiling. The front window featured a few stars like this of various sizes, and the boy who was drawing the stars in the book, was drawing a star on our window.

This was also interactive décor in which kids and caregivers could participate by coloring their own stars.

Needless to say, I’m devastated that we didn’t get a photo of the final windows. 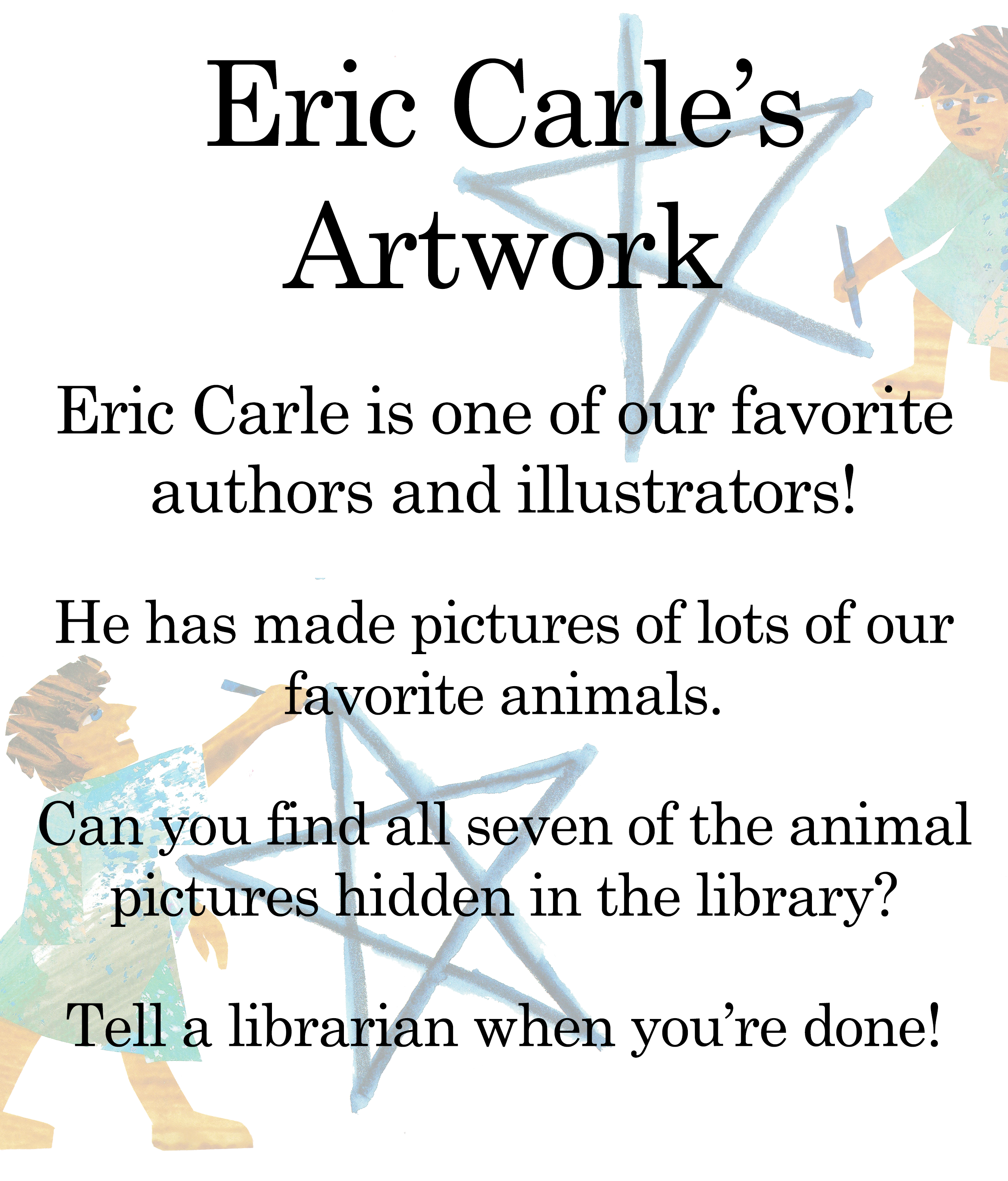 For once I actually do have all the parts of this particular scavenger hunt, but I’m choosing not to share since, ya know, copyrights and stuff.

Again, don’t hesitate to reach out if you have questions about anything, or you have any problems downloading any of the freebies.

I also love it when anyone sends me pictures of anything that I inspire them to do at their library. ::hint hint eyebrow waggle::

<a href=”http://hafuboti.wpcomstaging.com/wp-content/uploads/2013/08/shark-sign.jpg”><img class=”alignnone wp-image-687″ title=”This is the image we used for social media since it has actual books from our collection.” src=”http://hafuboti.wpcomstaging.com/wp-content/uploads/2013/08/shark-sign.jpg?w=584″ alt=”” width=”584″ height=”500″></a> We’ve had a very good response to the&nbsp;<em>Shark Week&nbsp;</em>display that I put up this week – so I thought that I’d share it along with some .jpegs and a <a…

While helping a patron today, I had the sudden realization that Monday is the first day where kids can claim their grand prize for our <a href=”http://hafuboti.wpcomstaging.com/2014/07/14/summer-reading-booklets/” target=”_blank” rel=”noopener noreferrer”>Summer Reading Program</a>! I thought that I had one more week to go. Oops. As a result, I threw together the sign for our prize table,…

This is another language that was requested and translated for me by two complete strangers within an hour of each other. It must be fate! Thank you, both Harri and Aulikki Knight!!!!!

I’ve been working on a flyer for an upcoming event, and as a result, I created this neat-o image for libraries/librarians who are into social media: <img class=”alignnone size-full wp-image-3147″ src=”https://hafuboti.wpcomstaging.com/wp-content/uploads/2016/03/social-library-logo.jpg” alt=”social library logo” width=”700″ height=”700″> As always, feel free to download, use, modify, and have fun with this image!

This is one of those ideas that I really can’t explain how I came up with it. It just sort of happened. About a month prior to having this idea, I had a realization: use <strong><em>all</em></strong> of the front entryway windows at our main library building for programming flyers. Prior to this idea, all events…