We began prepping for this theme over a month ahead of time because we were creating the paper that we’d be using for the core elements.

I have some wonderful memories of making paper with Meggie that I will cherish forever.

This process took up a lot of space, and so part of the process not shown in our how to video (that we shared with our patrons), is that we would iron the wet paper to help it dry faster. We’d sandwich it between thin towels on a small ironing board and iron away. For this reason we did this part when either our building was closed, or if very few patrons were around.

Once they were safe to move, we’d line them up on part of my desk and point a fan at them. Partway through the day I’d flip them over to make sure everything dried well.

Here’s a little trick that Meggie figured out after creating her scarecrow during the previous month- tape up whatever artwork you’re putting in a window – with a second image of the original flipped. This way you’re not doing mental gymnastics to figure out what goes where when you reverse it. So simple, but such an energy saver!!!

Q: What do you do if a delicate artwork has been taped to the window, and you realize that you accidentally left a paint detail off of it?

A: You create a vertical workspace with reusable cloths taped up under it so the paint doesn’t get on the windows.

We also tore a bunch of the handmade paper into rough circles and taped them to the windows to represent snowflakes.

This part is where it got ridonkulously fun for me – partly because it was a heckuva big bang for very few bucks, but also incredibly easy to do and clean up.

Every December (except in 2020), we participate in an event our Downtown Association puts on called Greenery & Glitter. We open the Children’s Library for it (on our normally closed Sunday), and we have a guest storyteller telling stories the entire time.

In 2021 we felt it safest to not have the building open (because it’s normally PACKED for this event), but have craft kits outside that our Library Director and Children’s Librarian would keep stocked.

But I wanted the community to still see that we were a part of it. So what did I do? I added glitter to the windows via shiny foil confetti. And not only did I add it on the inside, but on the outside as well!!!

Once it was outside, it uber-glittered and really popped. That’s why I included the second image at the top of this post – it’s a little easier to tell that there is confetti on the outside of the windows.

And all it took to affix them to the windows? A TINY dot of watered down Mod Podge (50/50 mix).

In this picture, I show the “palette” I used – the top of a plastic container, where the Mod Podge was in the grooves. Then I’d put a couple of pinches of confetti on top, And in the photo I am showing you the amount of that “adhesive” we needed to get it up.

Yes it’s a teeny-tiny dot, but it spreads once placed on the window.

The image to the left is what it looks like from the other side of the glass.

Inside we didn’t lose any of the confetti pieces (except for the ones kids picked off, and that wasn’t many).

I did the inside confetti first, realized that it didn’t sparkle like I wanted it to on the outside (since most people would see it from the outside). And that’s when I went out and put confetti on the other side of the indoor confetti. It was also an optical illusion depending where you’d stand.

I had quite a few passer-bys comment on how much of a nightmare this was going to be to clean up. Not so! I used a razor blade scraper and just scraped them off. That single scrape would get the little dot of dried Modder (I’m tired of typing Mod Podge and water).

Outside we definitely lost some, but not a large amount. Next time I’ll probably use a mixture of Modder that’s more Mod Podgy than water for the outdoor confetti.

I also salvaged the aluminum foil from October’s theme, to turn into more window sparkles. And wow did they ever beautifully reflect the light. Like, it was very easy to spot the aluminum circles in the window.

Small Tip: when you need to hole punch something that doesn’t take kindly to hole-punching (and not because it’s too thick) – use a scrap piece of paper under the item and punch them together.

The foil was a bit trickier than most, but the paper trick made it possible to get that foil cut into circles.

Finally, our Children’s Librarian put together a very special StoryWalk® for this downtown event.

All of the businesses were really cool to have her tape up the pages of Fleming’s fun The First Day of Winter on their storefronts.

The families would both start and end at the library, and pick up a snowman-related activity to take home the experience.

For those of you wondering: the side windows and reading bench display were more handmade paper snowflakes and shiny confetti.

But wait – there’s a bit more! Once I discovered the Modder trick, I just had to use it again. So we decided to make December’s décor transition over into January (I love it when that happens). Be on the lookout for that post coming soon! 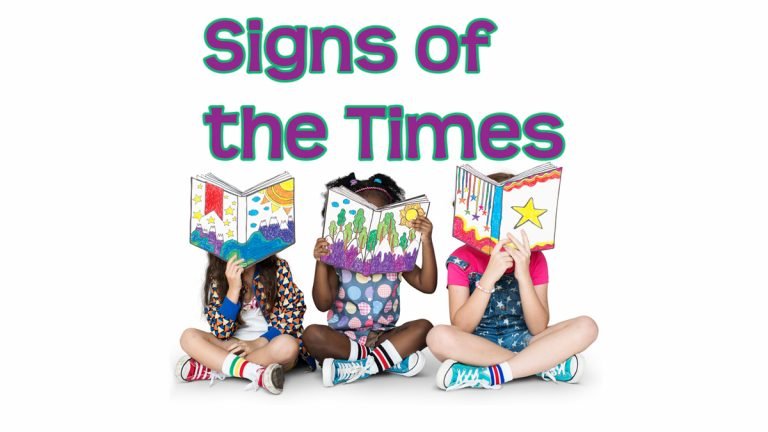 Alicia, a considerate reader, wrote to me to explain what Latinx is, and that I should include it as an important alternate version. I am very grateful that she reached out and made this suggestion. Don’t know what Latinx is? Then start your journey of understanding with this History.com article. Thank you so very much,…

Sean from Pollard Memorial Library in Massachusetts was able to get a Khmer translation from a local Cambodian group. Thank you Sean and friends!!!

This Fulani #LAFE translation comes from Robyn Stout, a Teacher Librarian in Indiana. Thank you so much, Robyn!!!

<img class=” size-large wp-image-2447 aligncenter” src=”https://hafuboti.wpcomstaging.com/wp-content/uploads/2014/12/ex1.jpg?w=584″ alt=”” width=”584″ height=”488″>The moment that&nbsp;<em>Decemberley&nbsp;</em>was created was one of my most favorite inspirational moments of the year. It was back in October, and our Children’s Librarian was using an Ed Emberley book to draw a skeleton on an activity table. I commented to her as I walked by that…